The company on Thursday reported a 55.48 percent decline in its consolidated net profit at ₹430.97 crore for the December quarter as against a profit of ₹968.24 crore in the year-ago quarter. 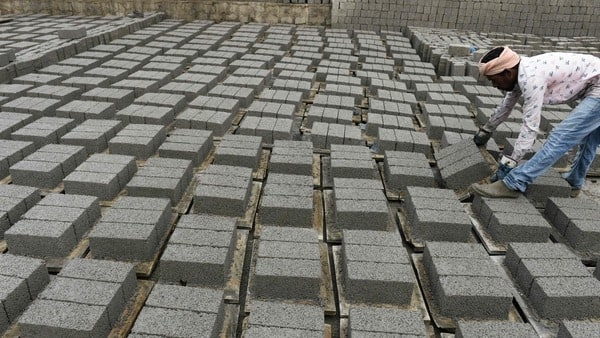 A labourer arranges cement bricks for drying at a manufacturing unit on the outskirts of Hyderabad on January 15, 2022. (Photo by NOAH SEELAM / AFP)

It follows January-December as its financial year.

Its revenue from operations in Q4 jumped a minor 2.31 percent to ₹7,625.28 crore compared to ₹7,452.87 crore in the year-ago period. Meanwhile, its margin contracted 660 bps YoY to 15.2 percent on account of higher fuel prices and flat realisations.

Post the earnings, the management noted that the firm's December 2021 quarter was unfavourably impacted by a steep escalation in fuel prices coupled with subdued demand in multiple regions

Going ahead, the company said economic activity continues to see improvement due to upbeat business confidence. The recently announced Union Budget focuses on growth led by a substantial increase in the capex (capital expenditure) for the infrastructure sector, it added.

“Cement demand growth is expected to remain positive backed by increased demand for housing combined with the government’s thrust on infrastructure development,” the company said.