Global inflation continues to be on an upward trajectory, inching closer to a 20-year high in some countries.

The FAO Food Price Index averaged 159.3 points in March, up 12.6 percent from February when it had already reached its highest level since its inception in 1990, the UN website shows.

Russia and Ukraine Conflict has driven up international prices for wheat, maize, and vegetable oils, as the war in the Black Sea region spreads shocks through the markets trading in these staples.

FAO’s (Food and Agriculture Organization) newly released Cereal Supply and Demand Brief estimates that at least 20 percent of Ukraine’s winter crops that were planted, may not be harvested.

The food supply chain has been severely disrupted as a result of war tensions and geopolitical uncertainties.

Can India do this?

India is the second-largest rice producer after China. As of early April, it had 74 million tonnes of rice and wheat in stock. Of this, 21 million tonnes have been kept for its strategic reserve and the public distribution system (PDS), which gives more than 700 million poor people access to cheap food, says Edelweiss in a research report.

Agriculture accounts for about a fifth of the economy in India, where nearly 60% of its 1.4 billion people depend on farming, directly or indirectly, for their livelihood.

The world's biggest rice importer, China, started buying Indian rice for the first time in at least three decades due to tightening supplies from Thailand, Myanmar, and Vietnam.

A global pandemic has also prompted Vietnam and other Asian countries to stockpile rice, and therefore they are forced to buy rice from India.

The impact of war has already started to be visible as India’s rice exports have boosted sharply. Since April 2021, February 2022 has seen the highest export volume of Basmati rice, says report.

Basmati exports were hampered in October and November of last year by high container freight costs and a lack of container availability. 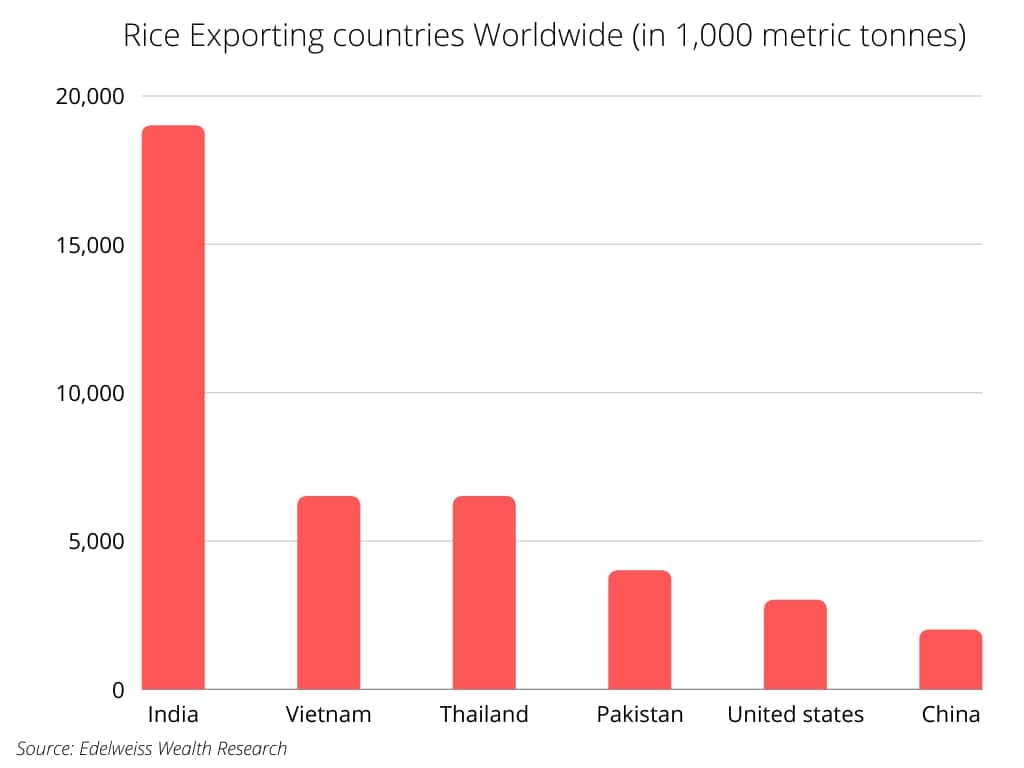 KRBL Ltd: KRBL is a market leader, exporting its products to around 82 countries worldwide. It has a strong brand portfolio. The “India Gate” Basmati rice is a very well-known name domestically and also increasing its footprints globally.

LT Food: It has a presence across 60+ countries globally. The company has consistently pursued its strategy of creating a strong brand portfolio under its flagship named “Daawat” in India. LT Foods has been constantly focusing on expanding its product offering in both International and Indian markets.

LT Foods' stock price has risen 29.4% in the last one month and 35.2 percent in the last three months.

Chaman Lal Setia Exports: The company exports rice to more than 70 countries across the world in the Maharani brand or under the private labels of the customers.