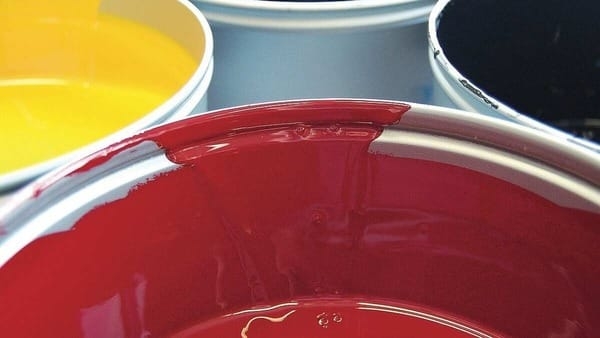 Rising input cost will exert pressure on the gross margins of the company and inflation may hit the company's sales volume.

After eight consecutive sessions of gains, shares of Asian Paints ended in the red on March 21. The stock fell about 2.85 percent to ₹3045.75, reflecting the subdued sentiment of the market. Equity barometers the Sensex and the Nifty ended almost a percent lower.

Shares of Asian Paints are now 15 percent below their 52-week high of ₹3,588.05 that they had hit on January 10, 2022. After the January high, the stock witnessed a selloff in mid-February and early March thanks to a sharp rise in crude oil prices which is a key raw material for the paints industry.

However, brokerages are positive and the stock and are of the view that the current correction in the stock is a buying opportunity even as they highlight that the margin of the company will remain volatile in the near term. They have also trimmed the stock's earnings per share (EPS) estimates to factor in a rise in raw material prices.

Domestic brokerage firm Sharekhan by BNP Paribas has a 'buy' call on the stock with a target price of ₹3,689, which is a 21 percent upside from the stock's March 21 closing price of ₹3045.75 on BSE.

Sharekhan highlighted that the Indian paints industry was reeling under the pressure of high input costs with margins of all paint companies sharply declining in nine months of FY22. Players hiked prices by 15-16 percent in Q3FY22 (cumulative price increase of 20-21% for Asian Paints) to mitigate cost pressures. However, the Russia-Ukraine crisis led to a sharp spike in the crude oil prices to upwards of $130 per barrel, which further stressed margins of the paint companies.

However, with some easing of the geopolitical situation, crude oil prices have now quickly corrected by 25 percent until mid of March, 22, thereby aiding a recovery in Asian Paints’ stock price.

"Historical trends suggest that Asian Paints witnessed quick recovery in profitability with a strong pricing strategy amid the sharp surge in raw material prices. This along with strong growth prospects makes its good buy in every dip from a long-term perspective," Sharekhan said.

However, as the rising input cost will exert pressure on the gross margins of the company and inflation may hit the company's sales volume, Sharekhan has reduced its earnings estimates for the company by 7 percent and 4 percent for FY23 and FY24, respectively, to factor in lower-than-earlier-expected gross margins and lower sales volume in the near term.

"We expect crude oil prices to remain stable at around $95-100 per barrel and accordingly factor in an increase in raw material prices for FY23. If crude oil prices remain volatile in the long run, the decline in margins will be sharper than anticipated and will act as a risk to our earnings estimates for FY23 and FY24," Sharekhan said.

"Asian Paints’ dominant positioning in the domestic decorative paints business and focus on becoming a complete home décor play in the long run gives us visibility of better earnings growth in the medium term. With the company focusing on becoming a complete home décor play, its valuation will remain at a premium in the consumer space. Hence, any further decline in the stock price due to volatility in crude oil prices would act as a good entry point from a long-term perspective," said Sharekhan.

As per the brokerage, the stock is currently trading at 71 times and 55.2 times its FY23E and FY24E earnings per share (EPS).

Brokerage firm Phillip Capital also has a 'buy' call on the stock with a target price of ₹3,675 which is again a 21 percent upside from the stock's March 21 closing of ₹3045.75 on BSE.

"Although in the near term there is going to be a lot of volatility in margins, Asian Paints' structural story – of market share gains, consolidation, and the optionality value of foraying into multiple categories – remains intact. We maintain a 'buy' with a revised target of ₹3,675 (65 times FY24 EPS) versus ₹3,850 earlier," said Phillip Capital.

"Asian Paints' stock has rebounded after a recent correction, we advocate investors to gradually add positions on every meaningful decline, as it is very difficult to predict the bottom of this juggernaut. It has seen revenue, EBITDA, PAT CAGR of 15 percent, 18 percent and 19 percent, respectively, over FY02-21," Phillip Capital added.

The brokerage firm has cut its EPS estimates by 5-7 percent each for FY23-24 to account for high raw material (RM) costs.

However, the brokerage firm is positive about the stock. While the demand for paints is still healthy the brokerage believes the company's margins will remain volatile in the short term but eventually revert to the mean on calibrated price hikes, formulation efficiencies, and reduction in discretionary costs.

"New competitors will find it difficult to gain ground from Asian Paints, given most of its moats are unsurmountable. The valuation multiple might continue to remain rich, given its ambition of being a home-improvement player and the large TAM (total addressable market). The key in all this will be execution since so far Asian Paints has been a one-trick pony," said Phillip Capital.

Market sentiment on the stock is ‘neutral’, according to a MintGenie poll and an average of 37 analysts has a ‘hold’ call on the stock.