Gold stocks are rising. Do you own any? Gold stocks are rising. Do you own any?

As sanctions against Russia continue to escalate, some analysts are not ruling out gold approaching $3,000 an ounce.

Gold saw a massive move to new record highs above $2,070 an ounce as markets priced in America's ban of Russian oil and other energy imports. 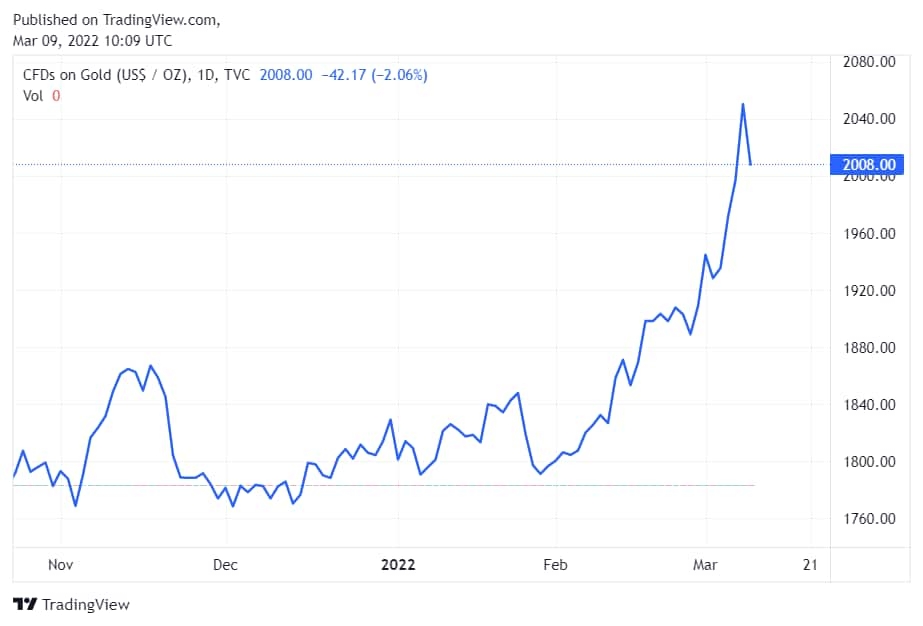 Adding to it, the volatility in the equities also prompted investors to shift focus to safer assets such as gold to absorb the shocks in the market.

Shares of Titan Company, Kalyan Jewellers, PC Jewellers, Rajesh Exports, Tribhovandas Bhimji Zaveri, Asian Star Co, and other gold companies were trading higher on Wednesday, gaining up to 5% on the Bombay Stock Exchange (BSE). In comparison, the BSE benchmark was trading 1,000 points or 1.9% higher at 54,434 at the time of reporting.

The stock price of Titan Company, the owner of jewellery brand Tanishq, gained as much as 2.15% to hit an intraday high of ₹2,427.45 on the BSE.

The Rakesh Jhunjhunwala-backed Tata group stock gained after four consecutive sessions of fall and was trading higher than 200-day moving averages, but lower than 5-day, 20-day, 50-day, and 100-day averages.

The surge in gold stocks was driven by a record rally in yellow metal prices which surged about 18% so far in the calendar year 2022 to cross $2,000 per ounce amid the Russia-Ukraine conflict.

Spot gold was down 0.5% at $2,040 per ounce at the time of reporting as strong dollar and rise in US treasury yields prevented further upside in gold prices.

The prices surged on risk aversion in global markets. Market sentiments were hurt on concerns that elevated commodity prices will weigh on economic growth. Additionally, investors are scrambling to analyse the impact of Russia’s invasion of Ukraine and harsh economic sanctions against Russia,” ICICI Securities said in a report.

Given the current uptrend in gold prices, analysts at Goldman Sachs expect the prices to surge by another 25% to $2,500 per ounce by the year-end.

This is a sharp revision in prices compared with the previous prediction in January this year. when the agency had raised their 12-month gold price forecast to $2,150 an ounce amid a hawkish policy stance by the U.S. Federal Reserve in wake of rising inflation.

As sanctions against Russia continue to escalate, some analysts are not ruling out gold approaching $3,000 an ounce.

The path to that level is possible in light of potential central bank gold buying that the world could see this year and the uncertainty around the Federal Reserve rate hikes.

Gold is being viewed as a tangible asset that no one can take away, Melek pointed out. "I suspect there is a lot of purchases by central banks. It's turning out that $600 billion of Russia's foreign reserves are useless because its central bank has been sanctioned.

The only thing that seems viable now is physical gold. The experience is similar on the individual level, as your accounts can be frozen. If they cut off your internet, you can't get your money. But no one can access physical material," he said.

We explain here how to invest in gold