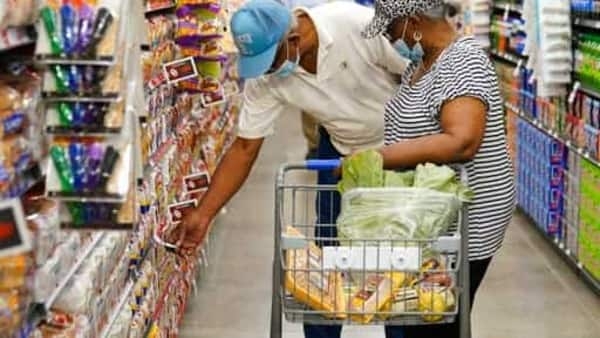 Many brokerages have expressed their positive views on the HUL stock after the company's March quarter numbers, citing the better than expected performance of the FMCG firm. Photo Credit: AP

The profit was higher than the average profit forecast of ₹2,200 crore by analysts in a Bloomberg survey. The company's operating margins at 24.6 percent remained healthy even as costs rose.

Shares of HUL have been under strong pressure of late amid concerns over soaring inflation. The stock is down 22 percent from its 52-week high of ₹2,859.10 that it hit on September 21, 2021, on BSE.

Many brokerages have expressed their positive views on the stock after the company's March quarter numbers, citing the better than expected performance of the FMCG firm. However, some of them have trimmed their target prices slightly due to likely pressure on the margin over the next two-three quarters.

Global brokerage firm Credit Suisse has an 'outperform' call on HUL, but it has lowered the target price to ₹2,550 from ₹2,800 and, as per CNBC-TV18, pointed out that the company's gross margin was under pressure, but cost savings protect EBITDA margin in Q4.

Morgan Stanley has an 'equal-weight' call on HUL, with a target price of ₹2381. As reported by CNBC-TV18, Morgan Stanley underscored that the company's Q4 earnings were ahead of estimates and its market share gains remain positive.

Brokerage firm JM Financial said that given demand weakness as well as elevated input-costs pressure, the fact that HUL was able to deliver such numbers for Q4FY22 speaks a lot about the sort of control and grasp that management has on its businesses, and consequently on the overall shape of its financials.

"One can attribute the (sense of an) earnings-beat to expectations having been brought down over a period of time, but we would still term a double-digit revenue growth (albeit with flattish volumes) and a (near)-double-digit EBITDA growth during Mar-quarter as ‘impeccable delivery’," said JM Financial.

"HUL remains one of our favoured picks, given that the bad news on both demand and margin are by now very well-known. The stock is trading below its five-year average valuation-multiple," said JM Financial.

Brokerage firm Motilal Oswal Financial Services has a buy call on the stock with a target price of ₹2,500 and pointed out that while Q4FY22 results were above expectations, management did highlight the likely sequential margin pressures over the next two-three quarters.

Beat in Q4FY22 was also led by a 220bp decline in ad-spends to sales that may not be a compensating factor going forward. Lower ad-spends to sales helped EBITDA margin surpass our expectations despite lower-than-expected gross margin, Motilal Oswal added.

However, the brokerage firm underscored that rural recovery - fuelled by good Rabi crop, good monsoon, and sustained agri commodity inflation- is the positive factor for the stock.

"We remain positive on the stock based on HUL’s technological edge, nimbleness against its FMCG peers and continued impressive market share gains," said Motilal Oswal.

Kotak Securities has a 'buy' call on the stock with a target price of ₹2,525 and said even as the near-term outlook for the company is weak, it expects HUL to emerge stronger when the tide turns.

Market sentiment on the stock is ‘moderately positive’, according to a MintGenie poll and an average of 37 analysts has a ‘buy’ call on the stock.