In a 'tactical' shift, Credit Suisse says prefer China and Australia over India; Four reasons why In a 'tactical' shift, Credit Suisse says prefer China and Australia over India; Four reasons why

The reason attributed by Credit Suisse for downgrading India, is the steep jump in the global oil prices due to the Ukrainian War.

The reason attributed by Credit Suisse for downgrading India is the steep jump in the global oil prices due to the Ukrainian War.

Credit Suisse highlighted, "Because of its strong structural prospects and robust earnings per share momentum, we will look for opportunities to re-enter the market, but today we tactically cut our India position. Higher oil prices hurt the current account, add to inflationary pressures and increase sensitivity to Fed rate hikes."

Raising bet on China, the report said, "We use the funds freed from India to raise China from Market Weight to Overweight. China's credit intensity still clouds long-term prospects but we like the country's low oil import bill, insulation from Fed rate hikes, improving macro indicators and wealth of potential policy tools."

"We also raise Australia from 'Market Weight' to 'Overweight'. We like the positive turn in EPS revisions, the favourable leverage to inflation and the neutral position on energy imports," it said.

Credit Suisse further highlighted that inflation also becomes more worrisome with the higher oil price in India. Over the past year, headline inflation has risen to levels not seen since 2014.

Here are the main reasons for Credit Suisse's downgrade of India.

The Indian Economy is likely to grow by 9.2% in FY22, according to the National Statistical Office’s (NSO’s) first estimate of gross domestic product (GDP) growth for the financial year.

This is lower than the Reserve Bank of India’s forecast of 9.5% and points to slower growth for the country in the second half of FY22. However, the Indian stock market isn’t perturbed.

The new year has begun on an upbeat note with the benchmark Nifty50 index rising by 3.7%, surpassing the 18,000 mark. Unsurprisingly, the Indian equity market’s valuation measured using Warren Buffett’s market capitalization-to-GDP ratio has surpassed its historical average. “It is probably the best measure of where valuations stand at any given moment," according to Buffett.

For FY22, the reading stands at 119%, ahead of its long-term average of 79%, showed Motilal Oswal Financial Services Ltd’s latest data. This ratio is the highest in at least a decade.

Valuations are pricey even based on the Shiller indicator, which is the cyclically-adjusted price-to-earnings (CAPE) ratio. It is named after the Nobel winning economist Robert Shiller.

This is calculated by dividing the price of the broad stock market index by the average inflation-adjusted earnings of that index over a period of five years.

The MSCI India index is trading at a one-year forward PE of around 22 times, a steep premium to MSCI Asia ex-Japan’s 12 times PE multiple, according to Bloomberg data.

MSCI (Morgan Stanley Capital International) India Index, is designed to measure the performance of the large and mid-cap segments of the Indian market. With 107 constituents, the index covers approximately 85% of the Indian equity universe.

The Modi government had a dream run with oil prices in the year 2020-21, amongst the most volatile years for international crude oil. With lockdowns and travel restrictions, demand for oil fell, with the price for Brent crude—the international benchmark for petroleum prices—fell to $9.12 per barrel on April 21, 2020.

But on March 2022, oil prices shot up to their highest level since 2014 to $130.10 per barrel. This spike in crude prices will ratchet up inflation, which is already on an upward trajectory. Crude oil products make up about 9 per cent of the WPI (wholesale price inflation) basket, which was at 13.56 per cent in December.

The crude oil price has more than doubled in the past year. It has risen by more than 30 per cent since Russia started a military operation in Ukraine on February 24.

Currently, oil accounts for more than a fifth of the country's total imports. India imports more than 80 per cent of its oil requirement. The price surge will increase India’s oil import bill.

The trade deficit has widened in recent months. This is expected to lead to a sharp jump in the current account deficit.

A ten per cent hike in oil prices will lead to an increase of India’s current account deficit by $15 billion, or 0.4 per cent of GDP.

The increase in oil prices will also fuel India’s subsidy bill, especially when it comes to kerosene and LPG.

Expects rise in Interest rates as inflations pick up

India's headline inflation rate based on the Consumer Price Index (CPI) jumped to 6.01 per cent in January 2022, as per data released by the National Statistical Office on February 14.

The RBI has said that the retail inflation would be around 4.5 per cent in the entire year 2022-23 with an assumption that oil prices will remain below $75 a barrel.

In order to support growth, the RBI has kept the policy rate benchmark, the repo rate, unchanged at 4 per cent for more than two years. (The repo rate is the rate at which banks borrow funds from the RBI to meet their daily temporary mismatches.) 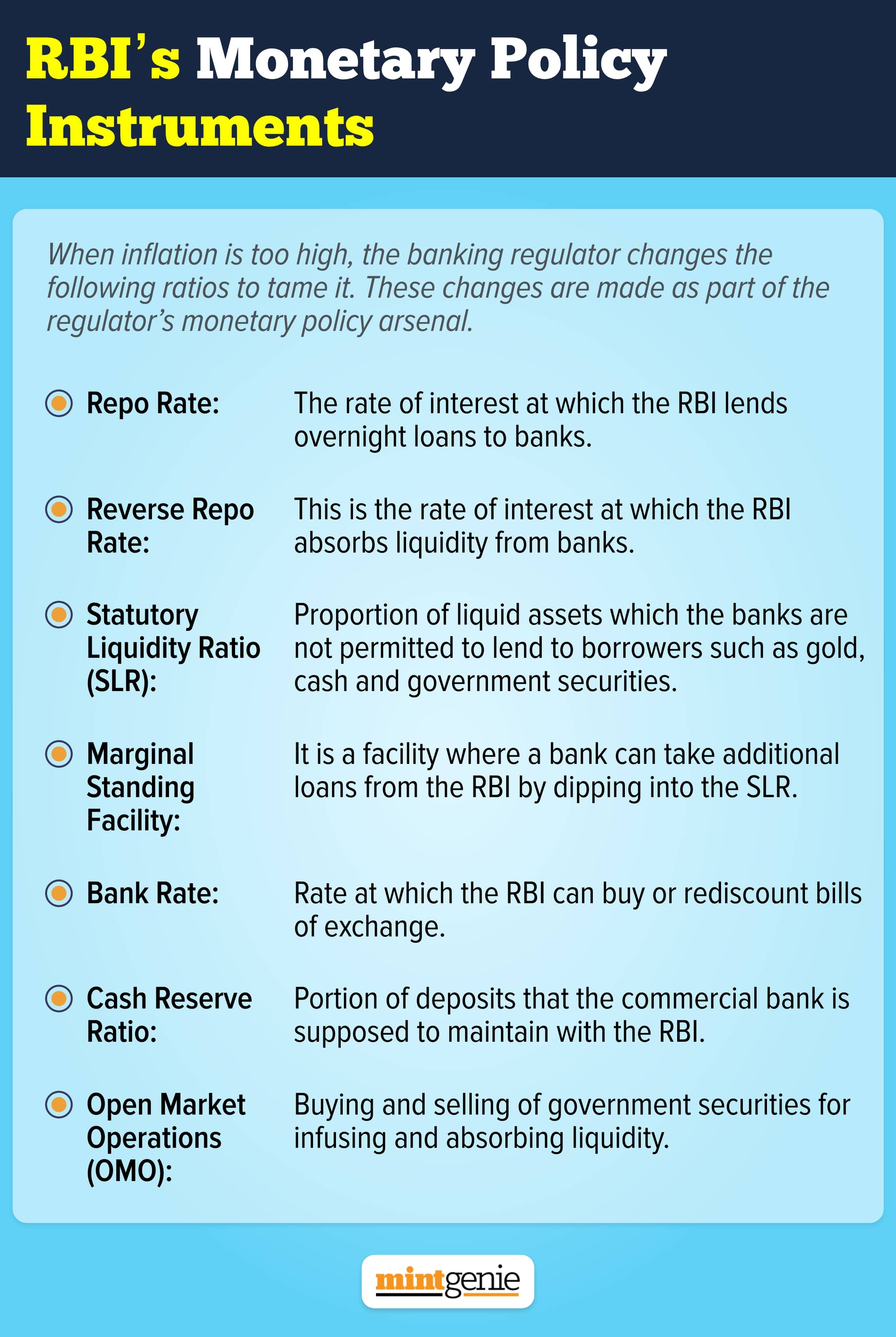 The RBI had kept the repo rate unchanged despite the consumer price index (CPI) being 5.3 per cent in 2021-22, which is closer to the MPC's higher band at 6 per cent.

The RBI’s monetary policy committee (MPC) targets an inflation rate or CPI of 4 per cent with a band of 2 to 6 per cent.

India had no extraordinary monetary accommodation during the pandemic.

Brent crude prices are uncorrelated with headline CPI inflation in India (because fuel & light have only a 6.84 per cent weightage in the CPI), but a generalized surge in commodity prices will likely keep India’s CPI inflation above 6 per cent year on year in Mar-Apr’22, nudging the RBI to raise the repo rate by 50 bp in Apr-Jul’22.

Rapid progress in the U.S. labour market and hawkish signals in minutes from the Federal Open Market Committee suggest faster normalization, with the central bank now likely to raise interest rates four times this year and start its balance sheet runoff process in July, if not earlier.

Many analysts expected the Fed was to begin a new campaign of rate hikes in March; however, the Ukraine crisis may force the central bank to act even more aggressively as the conflict escalates.

Currently, higher energy costs present the biggest risk of further boosting U.S. inflation from its four-decade high, which is bad for the American economy, with consumer confidence hitting the skids.

A University of Michigan survey showed that consumer confidence slipped 8.2% from January to February, with fewer consumers planning to purchase homes, automobiles, or go on vacation over the next six months amid concerns about the short-term economic outlook.

Indeed, there are fears that the U.S. economy could even slip into a recession.

Increases in the federal funds rate led to higher rates for interest rate products throughout the U.S. The result is usually an appreciation of the U.S. dollar. (Dollar will get strong against major currencies)

Finally, with a falling Dollar index, foreign investors find India a lucrative investment avenue to earn higher returns on their investments. As such, FPIs/FIIs flow into the Indian economy and contribute to economic growth.

The flow of capital to companies from their international joint venture partners goes up as FPIs and FIIs increase.

This allows companies to grow and expand themselves. Exports also increase, leading to a favourable Balance of Payments position for the country.

In turn, an increase in the Dollar index makes the dollar strong and depreciates the value of the INR.

A weakened rupee makes imports costlier and impacts India Inc.’s profitability due to increased production costs. Increased costs lead to inflation, and the prices of goods and services rise, much to the detriment of consumers.

Thus, the overall GDP (Gross Domestic Product) is impacted and suffers a slowdown when the dollar strengthens.