Market ends two-day winning run; what should investors do?

Market ends two-day winning run; what should investors do? 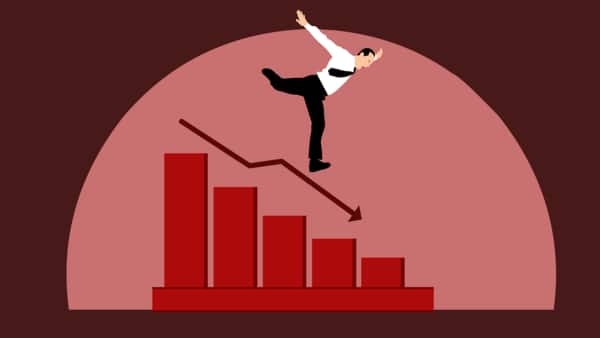 Frontline indices the Sensex and the Nifty ended their two-day winning run on March 2 as market sentiment turned cautious owing to a sharp rise in crude oil prices amid Russia's continued attack on Ukraine.

Benchmark Brent crude hit $110 per barrel in early deals today, rising to its highest level in nearly eight years and a majority of experts believe that oil prices may remain elevated - between $100-$110 per barrel - in the near future.

Other than the oil prices, the December quarter GDP numbers also spoilt the mood. Coming below the expected lines, India's Q3 GDP prints came at 5.4 percent which was at a three-quarter low.

"The strengthening of war drowned the global market, alarming the Indian market to start with substantial weakness. The negative effect was more on large-caps in-line with weak Q3 GDP data and downgrade of FY22 growth to 8.9 percent from 9.2 percent, by NSO," said Vinod Nair, Head of Research at Geojit Financial Services.

In the 30-share pack Sensex, seven stocks closed in the green, including Tata Steel, Titan, Reliance Industries, Nestle and Axis Bank. On the other hand, shares of Maruti Suzuki ended as the top laggard with a loss of 6 percent. Dr Reddy's Labs, Asian Paints, ICICI Bank, HDFC and HDFC Bank also settled among the top laggards, falling between 4-5 percent.

Among the sectors, BSE Metal clocked a sharp gain of 4.58 percent. On the flip side, BSE Auto, Bankex and Finance indices lost more than 2 percent each.

The market is expected to remain volatile in the short term as long as uncertainty prevails around the Russia-Ukraine conflict. Investors need to invest in quality stocks with a medium to long term perspective, analysts said.

"It makes sense to deploy the surplus cash in your portfolio in a step-by-step manner assuming stability in the future on a medium to long-term basis. The weakness subsided by the end of the day. However, volatility is expected in the near term given boiled crude price, state election outcome, and Fed policy status in the coming weeks," said Nair.

As far as technicals are concerned, 17,400 is an important support level for the short term.

"The market witnessed correction after a failed attempt to hold the support level around the level of 17,750. Market research suggests, 17,400 will be an important support level from a short-term perspective," said Vijay Dhanotiya, Lead- Technical at CapitalVia Global Research.

"Sustaining above 17,400, we expect the market to bounce back, and trade in the range of 17,400-17,800. Technical indicators suggest a volatile movement in the market," said Dhanotiya.

Shrikant Chouhan, Head of Equity Research -Retail at Kotak Securities, underscored that Nifty has maintained a lower top formation while on daily charts, it has formed a bullish Harami candlestick formation which supports a pullback rally.