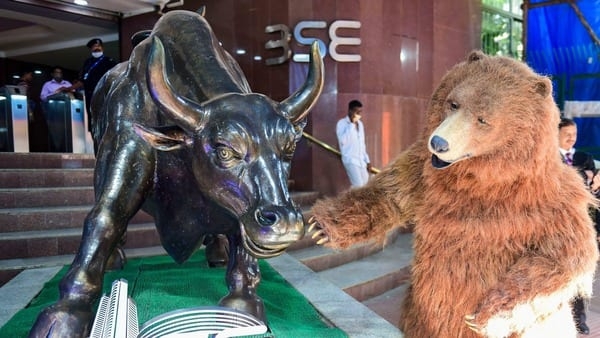 Headline indices the Sensex and the Nifty resumed their downward march on April 22 as weak global cues and concerns over elevated inflation and looming rate hikes kept sentiment fragile.

Bond yields have been rising in the US too amid inflation and hawkish US Fed. As per a Reuters report, US Federal Reserve Chairman Jerome Powell on April 21 said that a half-point interest rate increase would be "on the table" when the Fed meets in May and hinted that the Fed may move rather quickly on rate hikes.

With this, the market ended in the negative for the week too. Both Sensex and Nifty fell almost 2 percent this week while the midcap and smallcap indices slipped about a percent.

"The recent trend of the market was due to the release of high inflation data, the uncertainty surrounding Russia -Ukraine peace talks, volatile crude prices and weak quarterly results. Fed chair’s comment of an aggressive rate hike of 50bps by May made investors extra cautious," Vinod Nair, Head of Research at Geojit Financial Services, pointed out.

All sectoral indices ended in the red with bank, metal and finance indices falling up to 2 percent on April 22.

“This excessively volatile market without any clear direction is being influenced on a daily basis by external and internal factors. The external factor is the erratic movement in the mother market US where the S&P 500 and Nasdaq go up by around 2 percent one day and go down by around 2 percent the next day,” said V K Vijayakumar, Chief Investment Strategist at Geojit Financial Services.

Markets continued to price in the increasing probability of aggressive rate hikes by the US Fed.

"Federal Reserve Chairman Jerome Powell affirmed the central bank’s determination to bring down inflation and said that aggressive rate hikes are possible as soon as next month. Powell’s statements essentially meet market expectations that the Fed will depart from its usual 25 basis point hikes and move more quickly to tame inflation that is running at its fastest pace in more than 40 years," said Chouhan.

"Along with the rate hikes, the Fed is expected soon to start reducing the number of bonds it is holding. The central bank’s balance sheet now stands at close to $9 trillion, primarily consisting of Treasury’s and mortgage-backed securities," he added.

As per Ajit Mishra, VP - Research, Religare Broking, the market will react to the ICICI Bank numbers in early trade on April 25. Besides, global cues like updates on the Russia-Ukraine crisis, and China’s COVID situation will also remain on the participants’ radar.

"The slide in the Nifty index has faded hopes for a directional move and we may see further consolidation ahead. Amid all, participants should maintain focus more on stock selection and overnight risk management," said Mishra.