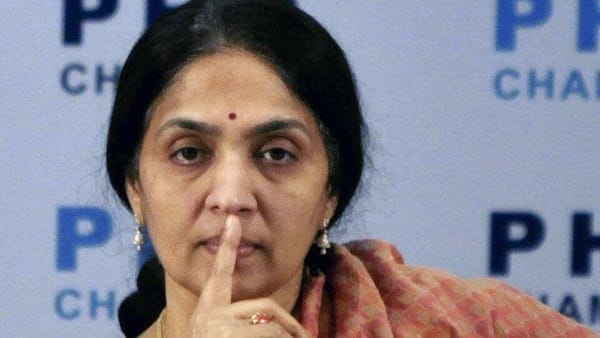 Former CEO and managing director of National Stock Exchange (NSE) Chitra Ramkrishna was sent to seven-day CBI custody on Monday. The agency sought her custody on the ground that she was “evasive” so far, and when she was questioned alongside her former aide Anand Subramanian on March 6, she just refused to recognise him, the agency informed the court.

The CBI said, "She gave evasive answers and that's why we had to arrest her. We need to confront her with the evidence."

She was arrested by the Central Bureau of Investigation late Sunday in connection with an ongoing probe in the NSE co-location scandal. She was arrested in Delhi and was produced before a local on Monday which sent her to a seven-day remand.

The former NSE boss applied for anticipatory bail that was denied by a special CBI court on Saturday that observed that the charges were "grave and serious" in nature.

Ramkrishna was the MD and CEO from April 2013 to December 2016. Before joining NSE, she worked with the IDBI Bank as well as Sebi. She was one of the founding members of NSE.

In 2016, she came under investigation due to a co-location scam in which select investors were suspected of receiving stock price information early on, helping them earn millions.

The rigging of the NSE’s algo-trading and use of co-location servers was allegedly done with the connivance of insiders. The matter came to light when a whistle-blower complained to SEBI in January 2015. After that Ramkrishna stepped down as NSE chief in December 2016.

In a recent scandal, it has come to light that former MD and CEO of the National Stock Exchange (NSE) Chitra Ramkrishna consulted an unknown 'Himalayan yogi' to help run the exchange, taking key decisions as well as shared confidential information with him. She led the NSE as MD and CEO from April 2013 to December 2016.

A new order placed on the Sebi website last month revealed the presence of this yogi and his influence on Ramakrishna when she was running the exchange. As per the order, Ramkrishna had been guided by this yogi, whom she referred to as ‘Shironmani’, for 20 years, in matters personal and professional. This unknown ‘yogi’, is represented only by the email id rigyajursama@outlook.com.

Sebi had hired audit firms EY and Deloitte to investigate the co-location scam. In 2017, EY, in its report, included emails exchanges between Ramakrishna and an outsider-influencer. The firm had identified the yogi as the former Group Operating Officer Anand Subramanian, who was hired by Ramkrishna. However, Sebi in its latest order dismissed EY’s finding due to inadequate and contradictory evidence.

NSE is the biggest stock exchange in India and such major governance lapses coming to light weakens the confidence of investors in the exchanges forcing them to invest in other assets for safety. This will also give a red signal to foreign investors, who are already withdrawing money from Indian equities.