Morgan Stanley said energy security is a key issue for policymakers and believes hydrogen will play a major role in the upcoming energy transition of India.

Shares of Reliance Industries touched a new all-time high in Thursday's trade, as Morgan Stanley has maintained an overweight rating on the company with a target price of ₹3253, implying an upside of 20% from the current market price. The stock is trading around ₹2780 per share, up by 2.27% from its previous close on the BSE.

In the base case scenario, Morgan Stanley expects the stock to rise to ₹3,253 over the next 12 months, aided by core gross refining margins of $12 per barrel in 2023-24 and the petrochemical business’ operating profit per tonne rising to $350.

However, under more favourable conditions, it says the stock is expected to rally to   ₹3,975 per share, which is around 42 percent higher than the current market price, on the condition that the company’s refining business margins remain elevated and more clarity emerges on its green energy investments.

Morgan Stanley said energy security is a key issue for policymakers and believes hydrogen will play a major role in the upcoming energy transition of India.

Because of the heightened awareness of energy security in the country, RIL's new energy business is expected to benefit from that, it said. The company's net asset value could be boosted by 10 per cent due to the new energy business, says Morgan Stanley

It also said that there is tightness in the refining and gas markets, so it expects Reliance may benefit from its old energy business, which could help in funding half of the capital expenditure required for its energy business over the next three years.

Because of this, the company's debt is expected to remain range-bound, it added.

Morgan Stanley noted some of the upside risks for RIL, which include tightening global refining and chemical markets as the global cost curve inflects, rising market share and reduced competitive intensity in the telecom industry, and partnerships in new energy businesses.

Further, it said Reliance may gain from the TRAI's lower spectrum prices and easier rollout obligations, It also says that reducing spectrum pricing for 5G and other bands by 30–50% will be beneficial.

REC, which has factories in Norway and Singapore, manufactures solar cells and modules along with solar-grade raw polysilicon.

Reliance plans to use REC’s technology, comprising 600 patents, to manufacture metallic silicon and solar panels at its giga factory in Gujarat’s Jamnagar. 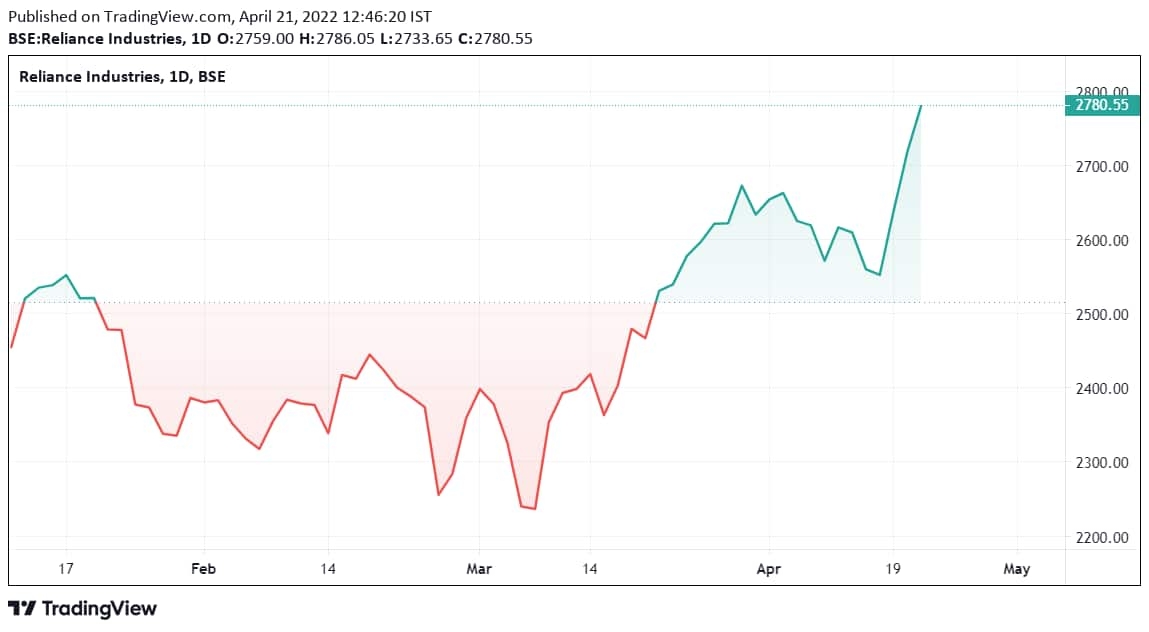 Further, over the past five years, the market price of the stock has zoomed by 297.15 per cent, as compared to a 105 per cent surge in the Sensex.

Mukesh Ambani announced a $10-billion investment by his Reliance Industries over the next three years in clean energy.

Reliance also has announced the setting up of four "giga factories" to make solar modules, hydrogen, fuel cells, and a battery grid to store electricity, at a cost of $8.1 billion.

It will also invest $2 billion in its value chain, partnerships, and future technologies.

It plans to facilitate solutions for large renewable plants across the world and become net carbon-zero by 2035.

An average of 34 analysts polled by MintGenie have a 'BUY' call on the stock.