Ruchi Soya FPO: Should you invest? Key things to know

Ruchi Soya FPO: Should you invest? Key things to know

The much-anticipated follow-on public offer (FPO) of Patanjali-owned Ruchi Soya will open for subscription on March 24, 2022, to raise around ₹4,300 crore. 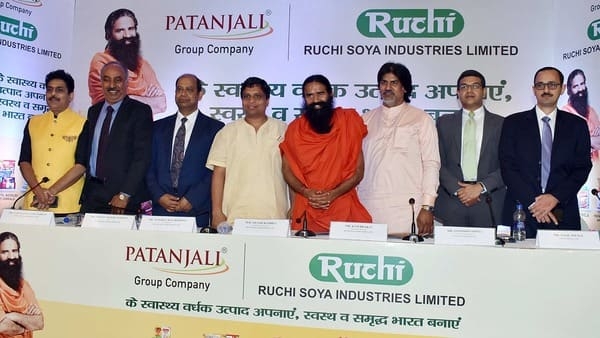 The much-anticipated follow-on public offer (FPO) of Patanjali-owned Ruchi Soya will open for subscription on March 24, 2022, to raise around ₹4,300 crore.

The much-anticipated follow-on public offer (FPO) of Patanjali-owned Ruchi Soya opened for subscription on March 24, 2022. The company looks to raise around ₹4,300 crore. The price band for the FPO, which will end on March 28, 2022, has been fixed at ₹615-650 per share.

Price Band: The upper end of the price band of ₹650 per share is at a 40 percent discount to the company’s current market price of ₹913.

The remaining 6-7 percent needed for the minimum public shareholding norm will be diluted before the Sebi deadline of December 2022, the company announced.

Views: Most market experts are bullish on the FPO and said that investors can subscribe to the FPO with a long-term view since it is available at a significant discount.

Domestic brokerage KR Choksey believes that Ruchi Soya is drawing synergies post its acquisition with Patanjali which has led to favourable changes in the company’s business model. Being a pioneer in the soya products and edible oil business, the company’s focus on diversifying its product portfolio beyond oils will help it emerge as a strong player in the category, it added.

“Ruchi Soya has focused on integrating its operations to build a value chain and improve its operational efficiencies. Further, the majority of the debt will be paid from the proceedings of the FPO while the remaining amount will help the company to meet its working capital requirements,” KR Choksey said in a report. It recommends ‘Subscribe’ for the listing and long-term gains for this FPO.

Religare Broking noted that Ruchi Soya has a well-recognized brand name, extensive distribution network and experienced management team. Going ahead, the company would continue to grow its relationship with Patanjali, focus on increasing high-margin products, and improve operating efficiency, it said. However, Ruchi Soya has high debt on the books and its plan is to utilize major FPO proceeds for repayment of its debt (~80-85 percent) in the next few months, added Religare.

Objective: The company plans to utilise the net proceeds for repayment and/or prepayment of borrowings, funding incremental working capital requirements and general corporate purposes, according to the red herring prospectus.

Reservation: Half of the issue size has been reserved for qualified institutional buyers (QIBs), 35 percent for retail investors and the remaining 15 percent is for non-institutional investors.

Book running managers: SBI Capital Markets, Axis Capital and ICICI Securities are the book running lead managers to the offer while Link Intime India is the registrar of the issue.

Bidding: Investors can bid in a lot of 21 equity shares and multiples thereafter. At the upper price band, it will be worth ₹13,650 to get a single lot of Ruchi Soya Industries.

About the firm: Incorporated in January 1986, Ruchi Soya Industries is one of the largest FMCG companies in the Indian edible Oil sector. Further, they are the largest manufacturers of soya foods under the brand Nutrela. They have launched a range of premium edible oils, blended edible oils and under Nutrela they launched High Protein Chakki Atta and Honey in FY21. It also owns other brands including Mahakosh, Sunrich, Ruchi Gold.

In 2019, Patanjali Group had acquired the stock exchange-listed company through an insolvency process for ₹4,350 crore.

IPOs are the first issues of the stakes of a company whereas FPOs are generally the additional issues.