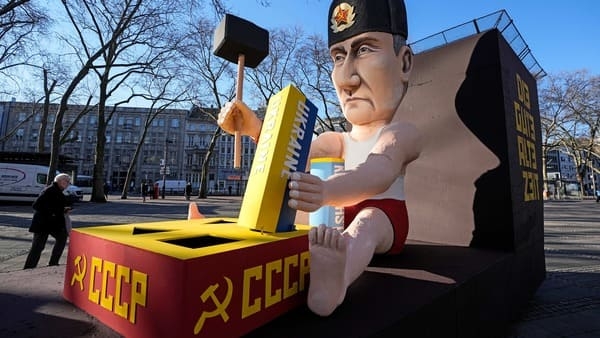 A satirical carnival float depicts Russia's President Vladimir Putin playing with the Ukraine to restore the Soviet Union on a square in Cologne, Germany, during a peace march against the war in Ukraine on Shrove Monday, Feb. 28, 2022. The traditional carnival Rose Monday Parade in Cologne was cancelled due to Russia's war in Ukraine. Instead of the parade, the political carnival floats were placed in the city followed by a peace protest of revelers. (AP Photo/Martin Meissner)

Russia's central bank steeply hiked its key policy rate to 20 percent from 9.5 percent earlier as major economies like US and UK impose sanctions in retaliation to Russia's invasion of Ukraine.

The sharp rise in its policy rate comes after the country's currency Rouble witnessed a major decline as the crisis escalates. Stringent economic sanctions against Russia imposed by the West have sent the Russian currency Rouble to all-time low levels. The Russian currency dropped to as low as 119 per dollar in early trading on February 28. Rouble had traded at 75 before Russia's invasion of Ukraine.

Rouble’s steep fall is expected to push Russia’s inflation up by 5 percent.

The bank hiked the key rate to counter risks of rouble depreciation and higher inflation and also ordered companies to sell 80 percent of their foreign currency revenues.

"External conditions for the Russian economy have drastically changed," the central bank said in a statement, adding that the rate hike 'will ensure a rise in deposit rates to levels needed to compensate for the increased depreciation and inflation risk."

It also increased the range of securities that can be used as collateral to get loans and ordered market players to reject foreign clients' bids to sell Russian securities, reported Reuters.

Nomura said the fresh reprisal measures by the West against Russia is likely to have wider global implications.

"These sanctions from the West are likely to eventually hurt trade flows out of Russia (around 80 percent of FX transactions handled by Russian financial institutions are denominated in USD), which will also hurt the growth outlook of Russia's key trading partners including Europe and lead to greater inflationary pressures and risk of stagflation, we think," Reuters quoted Nomura analysts.

The Russian benchmark index RTSI has tanked over 39 percent since the crisis started in mid-February.