Supreme petrochem, a pioneer in the Indian plastics industry Founded in 1942, is a well-known brand. They are effectively the country's largest polymer producer, with annual quantities of approximately 3,50,000 tonnes.

Supreme Petrochem Ltd, is India’s largest producer and global supplier of Polystyrene (PS), accounting for 90% of its total revenue. They possess two state of the art production facilities at – Amdoshi-Wangani, Maharashtra and Chennai, Tamil Nadu.

Supreme Petrochem Ltd. is a joint venture between the Rajan Raheja Group and Supreme Industries Ltd. The company's products are sold in over 100 countries throughout the world.

Supreme, which was founded in 1942, is a pioneer in the Indian plastics industry. With yearly volumes of over 3,50,000 tonnes of polymers, are effectively the country's largest.

With the production of polystyrene in 1957, India's plastic industry got off to a promising start. Significant progress was made, and the industry quickly expanded and diversified. More than 2,000 exporters work in the industry across the country.

It employs around 4 million people and has around 30,000 processing units, with 85-90 percent of them being small and medium-sized businesses.

India’s plastic and linoleum exports amounted to $7.55 billion in FY20. Plastic sheets, films, and plates exports totalled to US$ 1.53 billion in FY21, while packaging material exports accumulated US$ 863.62 million. 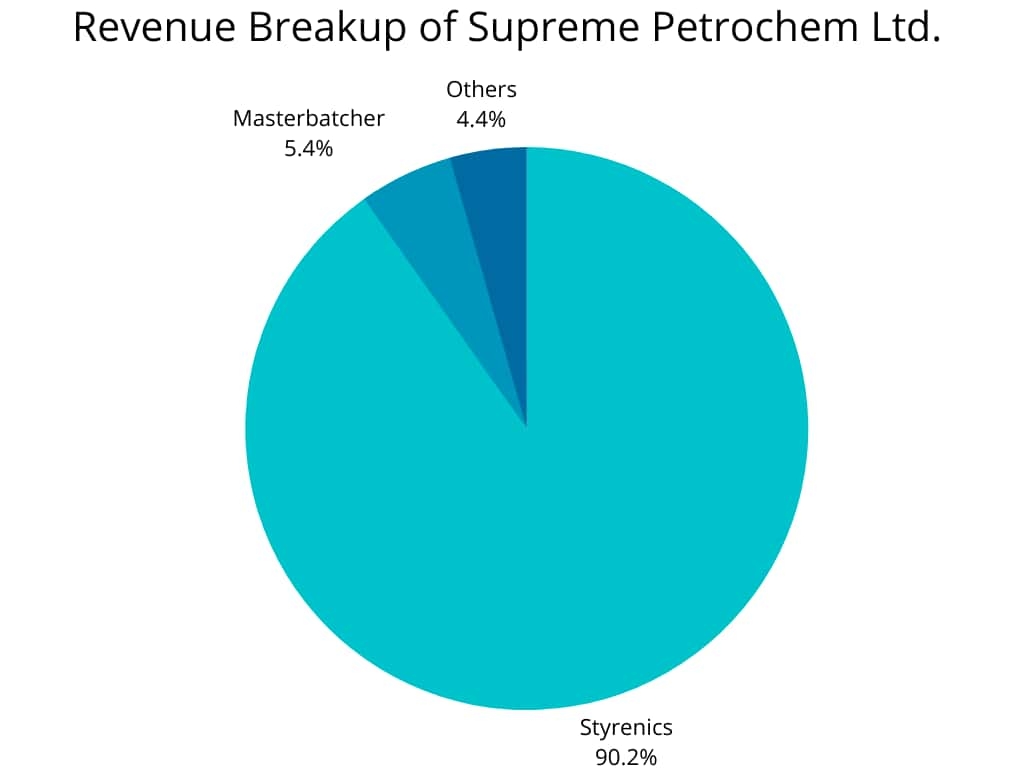 Polystyrene is a versatile material that can be used in a wide range of consumer items. It is widely used in products that demand clarity, such as food packaging and laboratory gear, because it is strong, solid plastic.

When coupled with various colourants, additives, or other polymers, polystyrene is used to produce appliances, electronics, vehicle parts, toys, gardening pots, and equipment.

Polystyrene Market to be Driven by Growing Packaging Industry – The rise of the worldwide packaging sector has been a significant driver for the global polystyrene market over the last few years due to the nature of polystyrene as one of the most trusted packaging materials used by mankind.

The company reported a 71.56 per cent increase in growth in total revenues for the October-December quarter on a consolidated basis at ₹1,190.76 crore. The revenues were higher by 13.64 per cent on a sequential basis compared to ₹1,047.79 crore in April-June of 2021.

Performance of the Stock

The board also approved the installation of the second line of Extruded Polystyrene Board (XPS) with a capacity of 1,00,000M3 and a 50,000 MTA increase in Masterbatch and Compounds capacity. Internal accruals will be used to fund the CAPEX.

Increased capacity and solid demand from end-user industries will drive Supreme Petrochem's future expansion. In recent quarters, the company's performance has been outstanding.