The era of ‘cheap money’ is coming to an end. What does this mean for you? The era of ‘cheap money’ is coming to an end. What does this mean for you?

Over the past decade, quantitative easing, or 'QE', once an unconventional tool of monetary policy, has become commonplace. The Fed used QE in the wake of the 2008 financial crisis to restore stability to financial markets. Now the Fed has adopted Quantitative tightening to control inflation.

The US Federal Reserve on Wednesday raised its benchmark interest rate by half a percentage point, the most aggressive step yet in its fight against a 40-year high in inflation.

The increase in the Fed's key rate raised it to a range of 0.75% to 1%, the highest point since the pandemic struck two years ago.

Chair Jerome Powell has said that he wants to quickly raise the Fed's rate to a level that neither stimulates nor restrains economic growth. Fed officials have suggested that they will reach that point, which the Fed says is about 2.4%, by year's end.

The 50-basis-point increase is the biggest increase the rate-setting US Fed has instituted since May 2000. Back then, the Fed was fighting the excesses of the early dot-com era and the internet bubble.

Wednesday’s move marked the first time the Fed has boosted rates at consecutive meetings since June 2006.

Meanwhile, The Reserve Bank of Australia lifted interest rates for the first time in a decade, foreshadowing the Federal Reserve’s rate decision on Wednesday.

The move is just the latest tightening among global central banks. New Zealand and Canada have also lifted borrowing costs. The Bank of England is expected to hike again when it meets on Thursday.

Back in India, the RBI on Wednesday raised its key lending rate by 40 basis points to 4.40 per cent with immediate effect. The central bank also raised the cash reserve ratio by 50 basis points. This was the first rate hike in policy rates since August 2018.

Since 2020, worldwide inflation has risen sharply to more than 6% as a result of unprecedented policy support for inflation, the release of pent-up demand, chronic supply disruptions, and skyrocketing commodity prices.

The commodity price surge triggered by Russia’s invasion of Ukraine last month is adding to these price pressures.

While many experts have argued that central banks are behind the curve—inflation is rising at the quickest rate in decades due to surging energy prices and strengthening post-pandemic demand—there is little doubt that policymakers are now rushing to raise interest rates as soon as possible.

Over the past decade, quantitative easing, or QE, once an unconventional tool of monetary policy, has become commonplace.

QE is a tactic used by the Central Bank to stimulate the economy in times of crisis. In simple terms, QE is just central banks printing more money and cutting interest rates. This leads to people spending money as keeping the money in the bank earns lower interest. Spending money leads to economic revival.

The Fed used quantitative easing in the wake of the 2008 financial crisis to restore stability to financial markets.

During the pandemic, the Fed purchased $3.3 trillion in Treasuries and $1.3 trillion in mortgage-backed securities in order to keep borrowing costs low.

Now it wants to reverse much of that, and in relatively short order, alongside rate hikes meant to cool inflation.

The Federal Reserve on Wednesday said it will start culling assets from its $9 trillion balance sheet in June and will do so at nearly twice the pace it did in its previous "quantitative tightening" exercise as it confronts inflation running at a four-decade high, Reuters reported.

The Fed's announcement of the start of this QT, or Quantitative Tightening, round came just one meeting after lifting its benchmark short-term interest rate for the first time since 2018.

In the previous episode, the launch of QT in the fall of 2017 occurred nearly two years after that cycle's first rate hike, which took place in December 2015.

This time's onset of QT is also a bit earlier relative to where the Fed is in its overall tightening process, along with announcing that QT will start in June.

From June 1, the Fed will start the process at $47.5 billion a month for the first three months, divided into $30 billion in Treasuries and $17.5 billion in MBS. It will be increased to the full $95 billion three months later.

When the Fed kicked off its first-ever QT undertaking, its total balance sheet was around $4.5 trillion in size. In nearly two years of QT, it managed to bring that down by about $650 billion, to a bit over $3.8 trillion before it brought the program to a stop.

Furthermore, the Fed said it would slow down and then stop the QT process if banking system reserve balances are "somewhat above the level it judges to be consistent with ample reserves."

The Bank of England, on the other hand, announced that it would allow 28 billion pounds ($37 billion) of government bonds to fall off its balance sheet for the first time.

BOE is taking initial steps to reduce its mammoth 875 billion pounds of government bond holdings, which have been built up to stimulate the economy for more than a decade, Bloomberg reported.

The QT process kicked off when the BOE lifted its benchmark lending rate to 0.5% in February.

The new program of quantitative tightening is being adopted by the central banks as the concerns of policymakers shift from supporting growth towards controlling inflation.

According to the IMF’s Global Debt Database, borrowing jumped by 28 percentage points to 256 per cent of gross domestic product in 2020. The government accounted for about half of this increase, with the remainder coming from non-financial corporations and households. Public debt now accounts for nearly 40% of global GDP, the highest level in nearly six decades, the IMF added.

During the pandemic, deficits increased and debt accumulated much faster than they did in the early years of other recessions, including the largest: the Great Depression and the Global Financial Crisis. The scale is comparable only to the two 20th century world wars, the IMF said in a note. 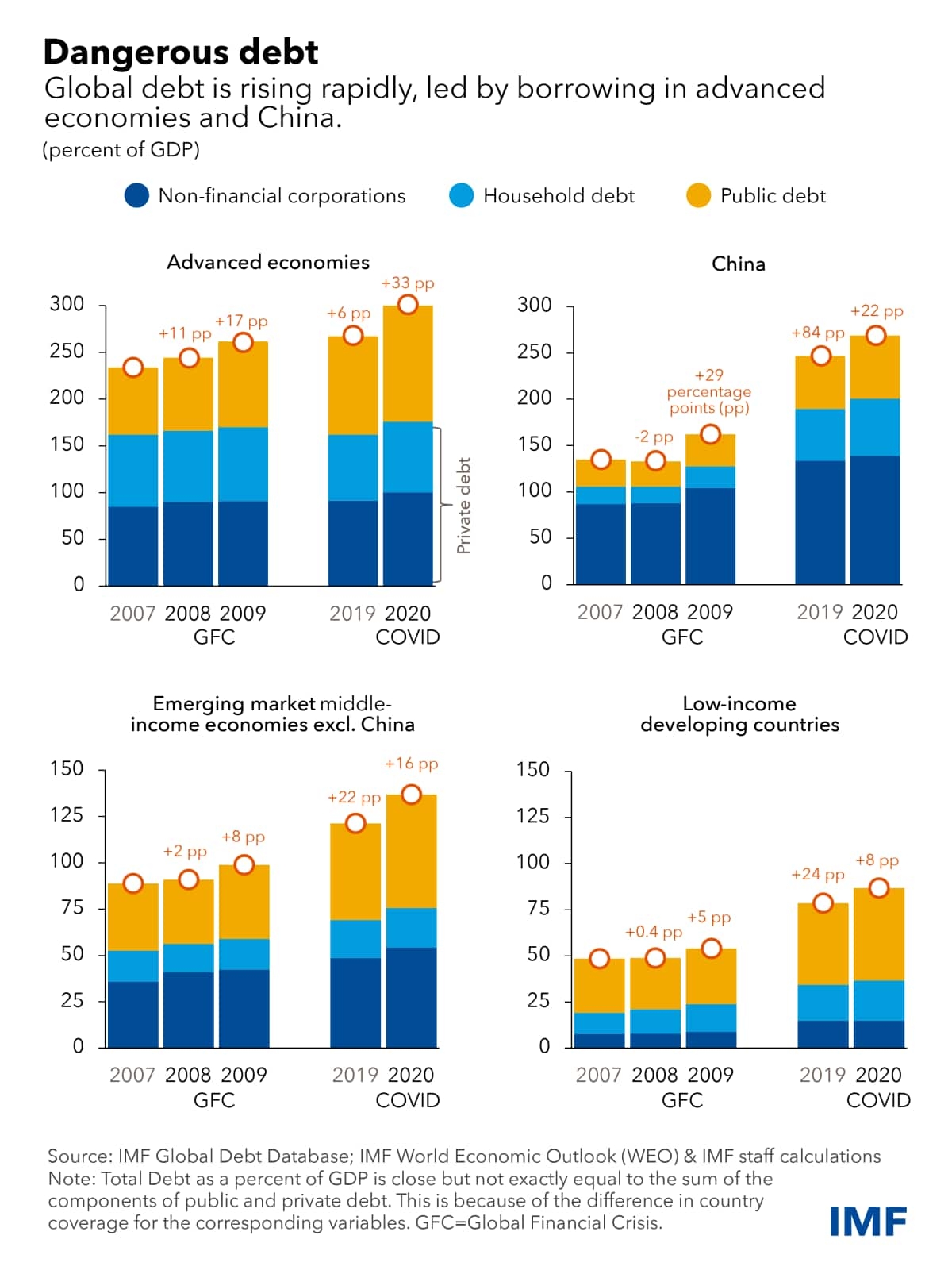 The IMF further said that emerging markets and developing countries (excluding China) accounted for a relatively small share of the increase. Although their public debt remains far below 1990s levels, debt in these economies has risen steadily in recent years.

Servicing costs have also been on a steep incline. Approximately 60% of low-income countries are currently in or at risk of financial distress. 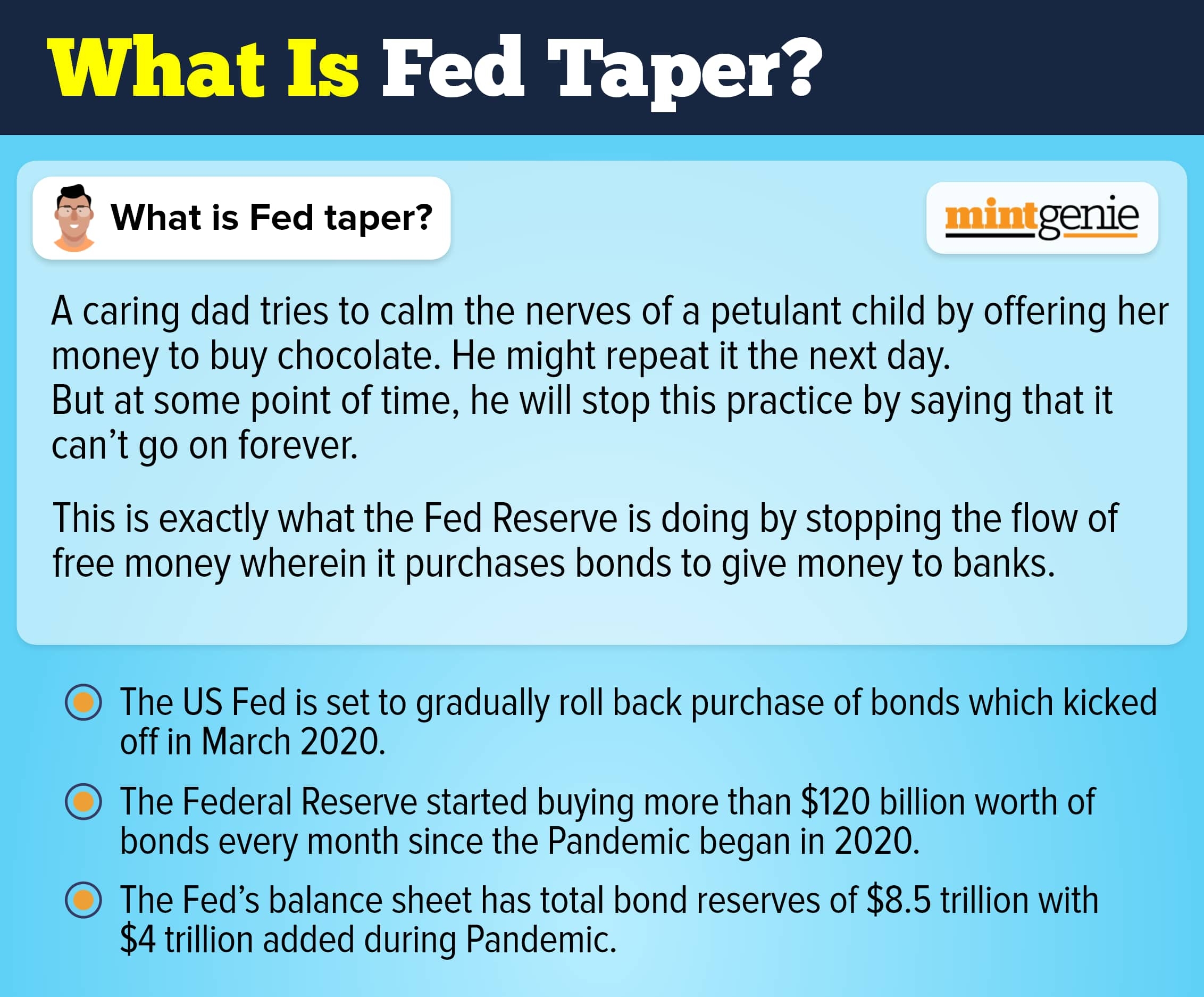 We explain here what is Fed taper