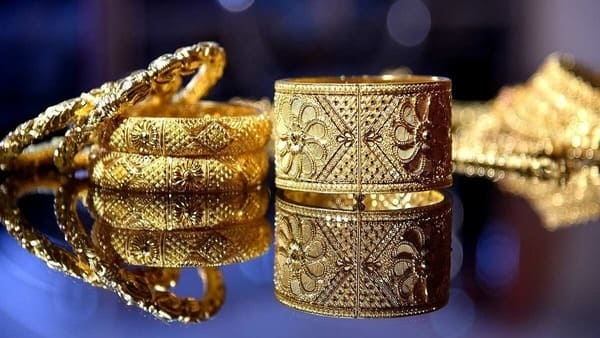 Shares of Titan Company fell more than 3 percent in intraday trade on BSE on April 7, a day after the company released its quarterly update for the fourth quarter of the financial year 2021-2022 (Q4FY22).

Due to Covid-led disruptions, the company's Jewellery segment saw a contraction of 4 percent year-on-year (YoY).

"The business saw subdued activity in top cities due to the Omicron wave in January 2022, a very strong resurgence in February 2022 and again a drop in customer purchases in March 2022 on the back of a sharp rise in gold prices and sentiment impact due to the external geopolitical conflict," Titan said.

However, segments such as watches & wearables (up 12 percent YoY), eyecare (up 5 percent YoY) and other businesses (up 23 percent YoY) gained on a yearly basis.

"The underlying demand continued to be strong across all of its businesses with most segments posting YoY growth over a very strong Q4FY21 base. The network expansion and campaigns have continued to progress well in anticipation of an upbeat Q1FY23 which is expected to be normal after a gap of two years of lockdowns in the same period," said Titan.

The stock has been flat this year so far against a 2 percent gain in the benchmark Sensex. Brokerages have retained their ratings on the stock and have mixed views on it.

Most brokerages have retained their view on the stock after the Q4 update.

Global brokerage firm Morgan Stanley has maintained an 'overweight' view on the stock with a target price of ₹2700 and said the company continues to progress well amid anticipation of an upbeat Q1FY23.

As reported by CNBC-TV18, Morgan Stanley found the company's Q4 update mixed but highlighted the upbeat commentary by the company's management on network expansions and campaigns.

Another global brokerage CLSA has maintained an "underperform' view on the stock with a target price of ₹2540. As per CNBC-TV18, CLSA expects Titan's EBITDA margin of 13.2 percent which will lead to earnings growth of 15 percent YoY.

Among the domestic brokerages, Motilal Oswal Financial Services has maintained a buy call on the stock with a target price of ₹2,910 and said the structural investment case for Titan remains intact.

"While (a) gold prices have stabilised at lower levels by the end of the quarter, (b) wedding demand remains very healthy, and (c) there is less likelihood of a disruption by any further Covid-wave, there could be some residual impact in Q1FY23 as well," Motilal Oswal said.

Kotak Securities has an ‘add’ call on the stock with a target price of ₹2,525. It said the Q4 performance of the company was a blip in a promising story.

Market sentiment on the stock is ‘moderately positive’, according to a MintGenie poll and an average of 29 analysts has a ‘buy’ call on the stock.