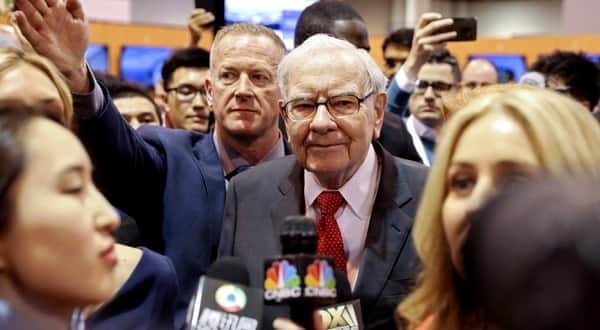 In a first, the share price of Warren Buffett’s Berkshire Hathaway hit $5,00,000 ( ₹3.82 crore) on Monday, reflecting the company’s status as a defensive stock amid geopolitical tension relating to Ukraine, and rising inflation, reported Reuters.

The Omaha-based company’s market cap is nearly $731 billion, sixth in the United States. Buffett’s 16.2-per cent stake makes him the world’s fifth-richest person at $119.2 billion, according to Forbes. Berkshire garnered a record $27.46 billion of operating profit last year, including gains at Geico car insurance, the BNSF railroad and Berkshire Hathaway Energy, wrote Reuters.

The Oracle of Omaha-led corporation also owns dozens of other businesses, including the fast-growing Clayton Homes mobile home unit and the largest US residential real estate brokerage. Berkshire specialises in “on the ground, Main Street-esque business activity,” said Bill Smead, chief executive of Smead Capital Management in Phoenix, which invests about $4.3 billion and owns Berkshire stock. “The are big and they’re not a tech stock, and investors get comfort from that.”

Among those expanding elsewhere includes Dairy Queen, which plans to add 600 stores in China by 2030. The Asian nation is already Berkshire’s largest market outside America. The company traded below $20 when Warren Buffett took over the then-struggling textile company in 1965.

Its Class B shares are worth about 1/1500th of Class A shares. US companies with larger market capitalisations include Apple, Microsoft, Alphabet, Amazon.com and Tesla. Apple is also Berkshire’s largest common stock holding.