Will new-age technology stocks continue to underperform in future? Will new-age technology stocks continue to underperform in future?

Experts were certain that India was on the verge of the IPO revolution in November of last year, just before the first IPO launched by any startup in India.

Startups were lining up for IPOs, and many were working on draft red-herring prospectuses to get SEBI approval for an IPO.

The overwhelming success of the Zomato and Nykaa IPOs drew the attention of institutional investors, who began pushing their portfolio startups to go public.

Retail investors were excited about the IPO gains, which increased by 100 percent within a few days of listing.

Within just 6 months since the celebration, all the excitement among Indian startups towards IPO has started fading away. The table has turned!

Retail investors who bet heavily on new-age technology companies are now kicking themselves because many of them are trading below their IPO price.

In the wake of losses, the high valuation of startups for private placement at pre-IPO and IPO stage, and the issue pricing were subjected to close scrutiny.

Concerns were also raised about stricter regulatory and disclosure standards, owing to the fact that startups were a different cup of tea for retail investors than mature businesses in terms of traditional metrics.

Recognising these developments, the Securities and Exchange Board of India (SEBI) is now reviewing the disclosure norms with regard to issue price in the share sale of new-age tech companies. In a consultation paper, the regulator has sought public comments on ‘Disclosures for ‘Basis of Issue Price’ as it looks to re-examine the pricing issue. Thus disclosure norms assume extra significance because quite a few new-age technology companies are waiting in the wings to tap the capital market.

According to the extant regulations, a company wishing to raise funds from the market through an initial share sale needs to disclose critical financial performance measures such as earnings per share (EPS), price to earnings (P/E), return on net worth (RoNW) and net asset value (NAV) of the company, including the comparison of such indicators with its peers.

These regulations under ICDR Regulations, para 9(K) of Schedule VI, are essentially for profit-making companies. New-age tech companies, however, file under 6(2) of Issue of Capital and Disclosure Requirements (ICDR) regulations.

Disclosures in ‘Basis of Issue Price’ particularly for a loss-making company are required to be supplemented with non-traditional parameters like key performance indicators (KPIs) and disclosure of certain additional parameters such as valuation based on past transactions or fundraising by the issuer company.

It is indisputable that investors should have access to all the relevant information so that there is no information asymmetry between the entity going public and the investors. Against this background, the recommendations of SEBI’s Primary Market Advisory Committee (PMAC) on detailed disclosure regarding KPIs of the issuing company are being broadly welcomed.

Since the fortunes of new-age tech companies change faster due to their constant effort to scale up, the disclosures should be on a quarterly basis for the previous 12 quarters, up till the most recent quarter before the listing date.

It was reported that SEBI may ask tech startups to share details about their valuations, basis which they are issuing new shares, offloading existing shares, in the past 18 months before filing draft offer documents.

SEBI had proposed a consultation paper inviting comments from the stakeholders until March 5, 2022. Despite that, the increased scrutiny has raised concerns among bankers, lawyers, and startups, even though the proposal was open for public comments.

The proposal had stated that disclosure of key accounting ratios such as price-to-earnings ratio were not enough. Therefore, it mentioned that SEBI will audit and seek disclosure of ‘all material key performance indicators (KPIs)’, the same ones that were shared with pre-IPO investors in the last three years.

Basically, KPI for a startup could be the number of downloads for a tech startup – metrics that are disclosed but difficult to audit or link to a company’s valuation. This is exactly why SEBI had tabled the proposal since KPIs are sometimes completely unrelated to the way company valuations are calculated.

Most startups are not profit-making entities and, therefore, retail investors often struggle to get a true picture of the financial viability of the targeted company. They are also in the dark about the future prospects since there is not much public disclosure.

It is to be seen how startups respond to this suggestion. For instance, If Swiggy decides to go public, it would be interesting to see a comparison of its KPIs with that of rival Zomato.

Investors will need to be especially cautious if Ola Electric decides to enter the primary market and its KPIs are compared to Tesla's rather than, say, Indian auto rivals.

The biggest setback came from Paytm IPO, which received a lukewarm response from the market. Still, it managed to attract a sizeable number of investors who poured in money in anticipation of huge listing gain by ignoring the warning of fund managers.

In November, Dazeinfo mentioned how Rakhi Prasad, one of the renowned fund managers, while speaking to Bloomberg, issued an alert to investors in regards to Paytm IPO. Within the first week of the Paytm listing, it became clear that Paytm is the worst listing in a decade.

Rakhi wasn’t alone who had many reservations against the startup IPO. Another investment advisor Abhishek Basumallick, Chief investment advisor – Intelesence Capital, was vocal too and openly expressed his concerns about the increasing number of Indian startup unicorns floating their IPO.

Fast forward to march, Paytm is trading all-time low. It is down by more than 65% than the issue size, making investors accumulate huge losses, without any sight for recovery in near future. The Big 4, including the most bullish JPMorgan, believes that Paytm will not be touching its listing price – forget issue price – anytime soon. 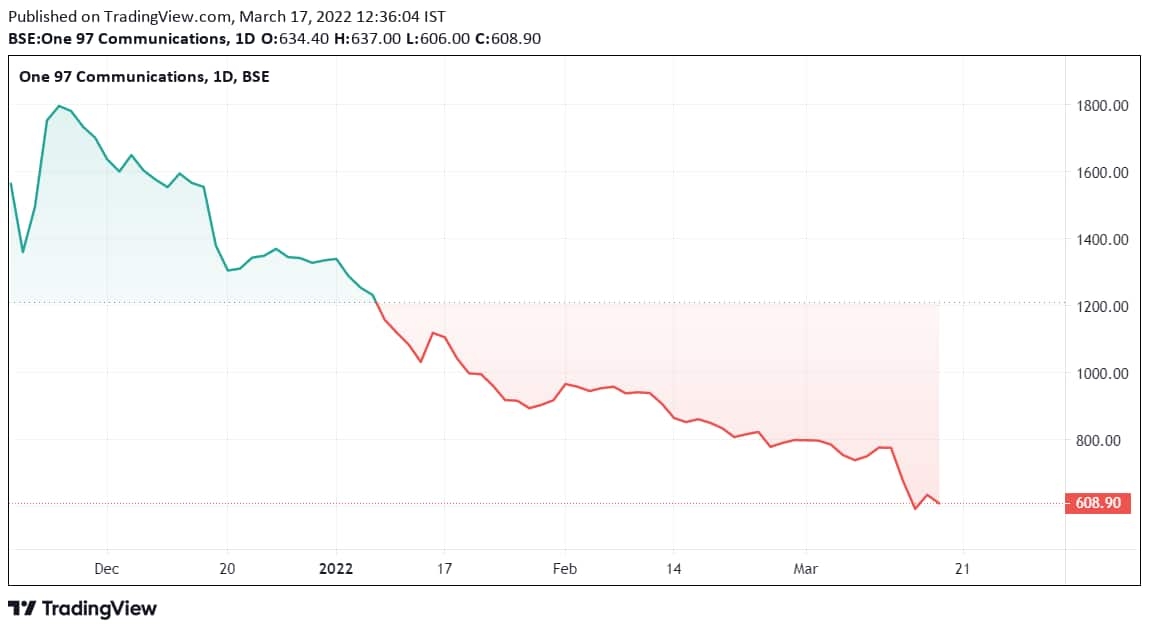 The ₹18,300 crore initial public offering of One 97 Communications, the parent company of fintech major Paytm, was the largest so far in India, but it was also among the most disappointing public issues of last year

The stock has dropped 9.5 per cent in the last month and more than 45 per cent since the start of the fiscal year 2022. 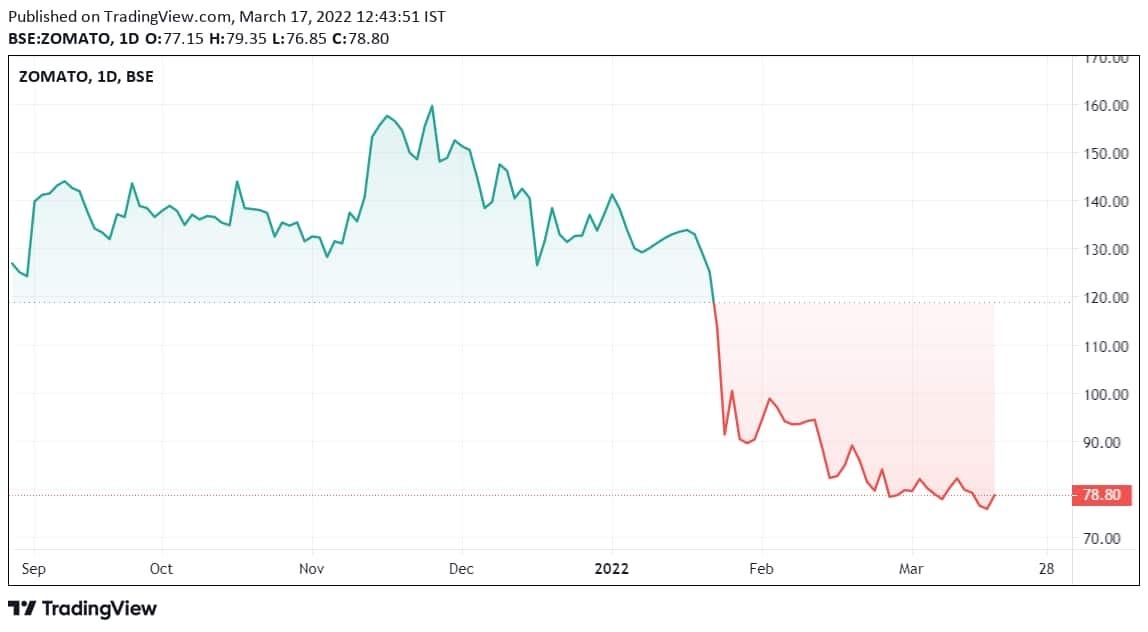 The story is no different for Nykaa, the fashion startup which was listed with nearly 80% gains on the stock market. The issue was oversubscribed by 82 times, which resulted in a bumper listing of Nykaa at ₹2,001 and within a few hours, it touched ₹2,129. 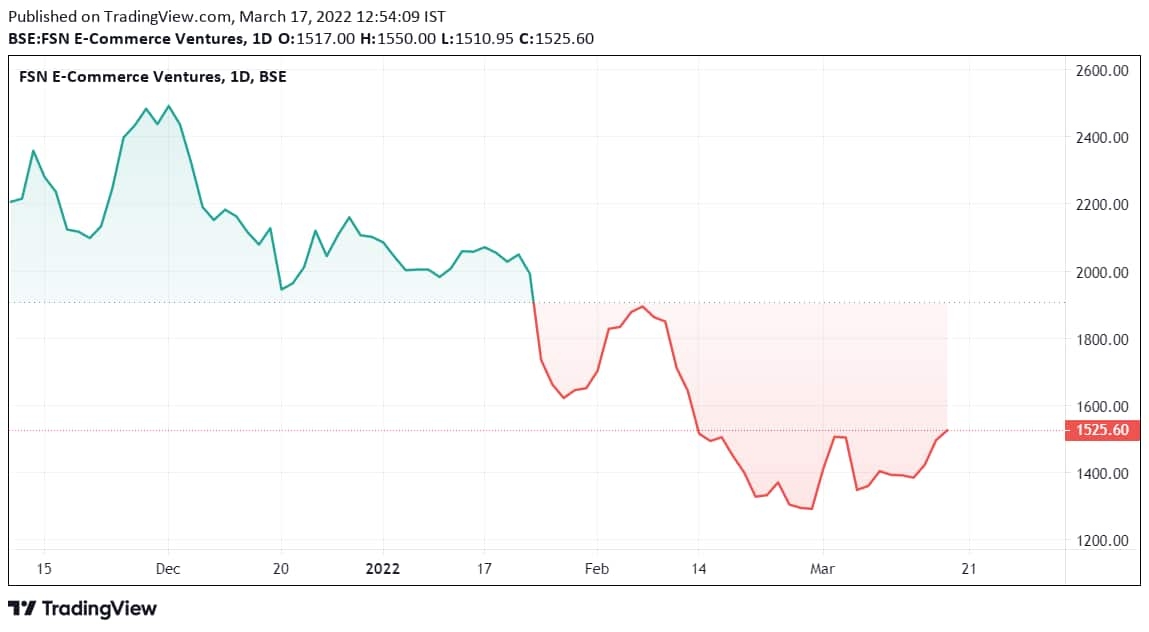 With an over 20 per cent decline, the stock has now corrected 43 per cent from its record high level of ₹2,574 touched on November 26, 2021. The company had issued shares at a price of ₹1,125 per share in its initial public offer (IPO)

Both Nazara and MapMyIndia, which were listed last year are trading below the listing price, and fast slipping closer to their issue price.

Besides institutional investors, many marquee investors, including Warren Buffett, have lost hundreds of millions of dollars so far. The fast-tanking valuation of Paytm has worsened the situation and now questions about the future existence of the company under the current leadership are being discussed galore.

The impact of the above is quite visible now. Many IPO-bound startups, which were aggressively working to launch their IPO until now, have either postponed their plans or gone back to the drawing board to rework their valuation that could appease investors. MobiKwik and OYO top the list of such startups.

Worse Not Over Yet

Will foreign investors or FIIs show renewed interest in tech startups? Of course, the Russian-Ukraine conflict makes the picture more complex and a war is never great for stock markets.

The US Federal Reserve’s sudden pivot towards fighting inflation by pulling back liquidity and indicating multiple interest rate hikes this year and the next has weakened the case for investment in richly priced technology stocks with no near-term visibility on profitability.

In the US, many technology stocks are reeling in a bear market as investors flock from high-priced stocks to those with valuation comfort. “Some new-age companies demanded a price to sales valuation of 40-70 times during their IPOs! It is expected that as major central banks across the globe go on a rate hike cycle, exorbitant valuations in some pockets of the market cool down,” said Aditya Kondawar, COO at JST Investments.

The Future for New-Age Stocks

New-age companies are unlikely to post exciting earnings figures in the next few quarters. The disappointment factor in the quarterly figures could be discernible when they are compared with some high-growing and profitable sectors.

Prospects are relatively bright long term as some of the newly listed companies have the potential to become profitable in 4-5 years. The correction should be seen as a part of the transition and nothing is permanent in the market.

India has the third-largest startup ecosystem in the world and a thriving capital market would definitely help entrepreneurship flourish in India.