Zomato shares reach an all-time low. Has the company bitten off more than it can chew? Zomato shares reach an all-time low. Has the company bitten off more than it can chew?

The company in an exchange filing on Tuesday said it has received its board nod to grant a loan of up to $150 million (around ₹1,145 crore) to online grocery shopping player, Grofers India Pvt Ltd (GIPL).

On Wednesday, shares of Zomato, the country's largest food delivery company, fell as much as 1.4 percent to a new low of ₹75.55 on the BSE. The stock has dropped 9.5 percent in the last month and more than 45 percent since the start of the fiscal year 2022.

On the BSE, Zomato shares opened 4.4 percent higher at ₹79.95, compared to the previous close price of ₹76.60. However, the stock quickly lost its gains and fell into negative territory, hitting a new low in an otherwise positive market. At 12 p.m., the stock was down 0.2 percent at ₹76.45, while the BSE Sensex was up 1.4 percent at 56,584 points.

Why did Zomato stock plummet to a new low?

The share of homegrown food delivery major dived amid reports that the company is in talks to acquire online grocery firm Blinkit (formerly Grofers). However, there is no official confirmation about the proposed deal.

The company in an exchange filing on Tuesday said it has received its board nod to grant a loan of up to $150 million (around ₹1,145 crore) to online grocery shopping player, Grofers India Pvt Ltd (GIPL).

“The board and the company at its meeting on March 15, 2022, has approved grant of loan up to $150 million to Grofers India in one or more tranches and delegated the authority to the senior management of the company to decide the key terms of the loan and execute the definitive documents at a future date,” Zomato said.

According to the company, the interest rate on the loan will be at least 12% per year with a duration of no more than one year. This financing will help GIPL meet its immediate capital needs and is in keeping with the company's stated intention of investing up to $400 million in cash in rapid commerce in India over the next two years.

Brokerage house Dolat Capital noted that the declining contribution with weak growth in Gross Order Value (GOV), suggests that the growth is getting softer while cost pressures are not moderating.

This, along with a further allocation of ₹550 crore on minority investments, is straining cash-flows. It has a 'Sell' rating on the stock with a target price of ₹75 per share.

In August 2021, Zomato had received CCI approval for a $100-million investment for 9.3 per cent stake in Blinkit.

In a separate development, the board of the company also gave a nod to the acquisition of a 16.66% stake in Mukunda Foods, a food robotics company, for $5 million.

“The board has approved the acquisition by way of subscription of 13,289 Series B1 compulsorily convertible preference shares and 10 equity shares collectively aggregating to 16.66% of the share capital of Mukunda Foods Private Limited on a fully diluted basis, for an aggregate cash consideration of Indian rupee equivalent of $5 million,” Zomato said in a filing to the BSE.

Mukunda is a food robotics company that designs and manufactures small robotic equipment to automate food preparation for restaurants. Their products enable restaurants to scale rapidly while maintaining consistency in food quality and customer experience across multiple outlets. 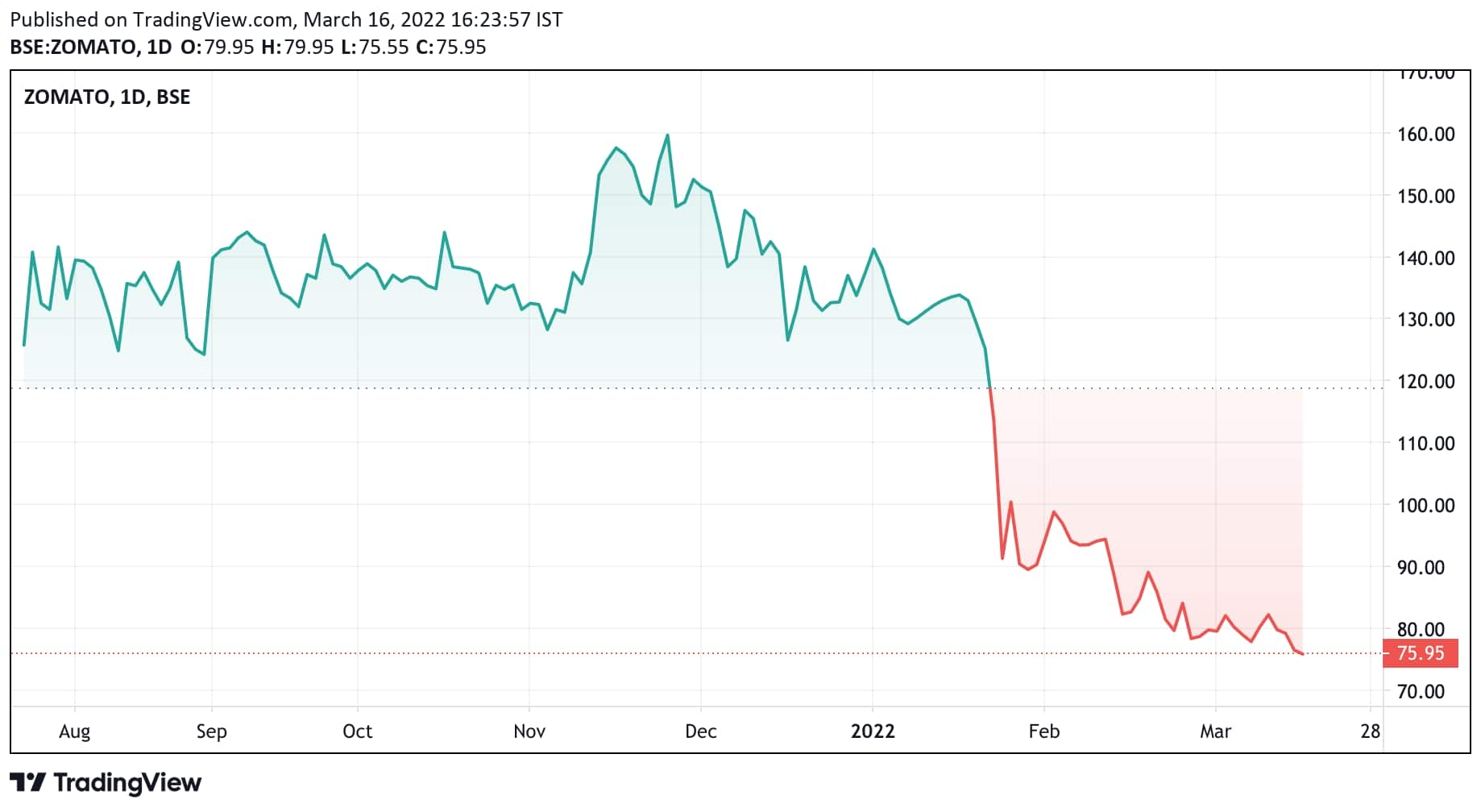 National Restaurant Association of India (NRAI) filed a detailed probe against food aggregators, Zomato and Swiggy, with the CCI on 1 July 2021.

This was to encourage others to free themselves from their “unhealthy dependency" on food delivery aggregators. And also to move to platforms that charged lower commissions and imposed less strict controls.

Since then, the wave of resistance has grown from restaurants, helped by direct order platforms that offer to process deliveries for a fraction of the commission.

Direct order platform DotPe has signed up 20,000 restaurants, while thrive has more than 7,000.

However, experts feel that the scale of Zomato’s business makes it highly unlikely that direct order challengers will replace it, or even significantly undermine its business in the short term.

Perhaps a greater threat to Zomato and Swiggy comes from Amazon, which began a limited roll out of food delivery in Bengaluru in March last year, charging half the commission of the incumbents.

Even with some restaurants shifting to other platforms, revenues for Zomato have continued to grow. Net sales rose 82.47% to ₹1,112 crore in the third quarter of December 2021 over December 2020.

However, a notable deceleration in the company's growth rate suggests it likely won't see such a perfect operating environment (pandemic) ever again.

Another important metric, Average Order Value (AOV) shrunk by about 3% QoQ, mostly on account of reduction in customer delivery charges.

This has a direct bearing to the company’s bottom line. Zomato’s costs per order are a fixed expense.

Hence, with costs increasing and the AOV shrinking, there is a lot of pressure on the operating margins.

This is worrisome for investors as Zomato failed to generate a profit, even with soaring revenue in the seemingly perfect operating environment during the pandemic.

Zomato made a bumper debut on bourses with the unicorn hitting the ₹1-lakh crore market capitalisation mark.