From ills of inflation and importance of cash to mania around bitcoin, Warren Buffett & Charlie Munger spoke on a raft of issues 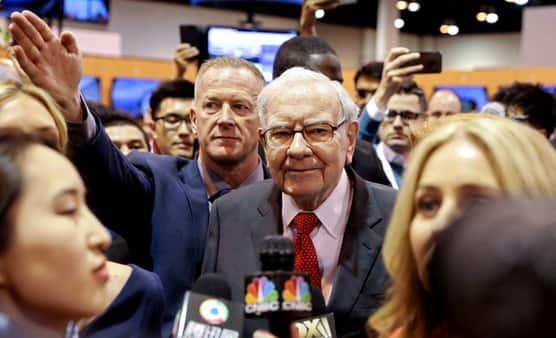 This is the first in-person meeting since 2019. Photo: Reuters

In the annual meeting of Berkshire Hathaway, Warren Buffett and Charlie Munger spoke on a number of issues ranging from inflation and passive investing to cryptocurrencies. This is the first in-person meeting since 2019.

While speaking about his firm Berkshire Hathaway, Buffett said the opportunities are endless as the company is like a work of art.

“I look at Berkshire as a painting,” Buffett said. “It’s unlimited in size; it’s got an ever-expanding canvas, and I get to paint what I want.”

Here, we highlight some of the key issues that the Oracle of Omaha highlighted in his latest public address.

1. Inflation swindles everyone: He commented on inflation to further bolster his previous remarks. He had previously said that inflation “swindles” equity investors. On Saturday, he noted that it “swindles the bond investor, too. It swindles the person who keeps their cash under their mattress. It swindles almost everybody.” “You print loads of money, and money is going to be worth less,” Buffett said.

As of now, index funds take about 50 percent of the public companies' shares, proxy voting has become a major concern.

3. Cash is still the king: Warren Buffett underscored the point that holding lots of cash is good. He said there is a difference between treasury bills and commercial papers. The former is cash, whereas the latter is not. Buffett's company Bershire Hathaway still holds $100 billion in cash.

Instead, he said he adheres to a value investing strategy, i.e., picking stocks with attractive valuations, rather than focusing on the stock market’s vagaries.

5. Fundamentals over technical trading: He spoke about a salvation of sorts at the age of circa 19 when he read The Intelligent Investor and he stopped doing technical analysis.

However, his approach later changed completely when he was 19 or 20 years old after reading one particular book passage in what he said must have been Benjamin Graham’s “The Intelligent Investor.”

“I looked at this book and I saw one paragraph and it told me I’ve been doing everything wrong. I just had the whole approach wrong,” Buffett said.

6. Speculation around heir: This is the second year that Buffett and Munger were not alone on the stage. They were accompanied by Ajit Jain and Greg Abel. It is now a common knowledge that Buffett will pass the baton to Greg Abel when the former decides to hang up his boots.

And Ajit Jain would be around as a backup option just in case Abel were not available. It’s like in the British royal family — a heir and a spare.

7. Bitcoin bashing: Warren Buffett made his skepticism of bitcoin public on Saturday again, saying he would not buy it for even extremely low prices since it produces nothing of value.

“Whether it goes up or down in the next year, or five or 10 years, I don’t know. But the one thing I’m pretty sure of is that it doesn’t produce anything,” Buffett said. “It’s got a magic to it and people have attached magics to lots of things.”

He listed farmland, apartment buildings and even art as assets which have more tangible value than bitcoin.