Buffett letter: Stake in Apple at $161 billion while quest for ‘owning’ businesses goes on

Buffett letter: Stake in Apple at $161 billion while quest for ‘owning’ businesses goes on

The latest letter by Warren Buffett underscored the significance of long-term investment which is seen more as a marathon instead of a sprint. We share more details from the letter 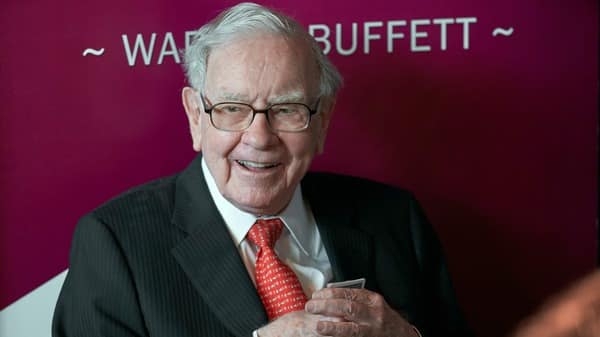 Warren Buffett said Berkshire Hathaway had $144 billion in cash and short-term investment but hopes that the era of hoarding cash would finally end.

In his famous annual letter to the shareholders of Berkshire Hathaway, ace investor Warren Buffett underscored the importance of long-term investing, instead of chasing immediate gains to jack up the quarterly figures.

Buffett, who is also known as the ‘Oracle of Omaha’ said Berkshire had $144 billion in cash and short-term investment at the end of December but he hopes that the era of hoarding cash rather than owning businesses would finally end. “These periods are never pleasant; they are also never permanent,” he said.

He emphasises on owning businesses rather than looking for short-term investment for immediate gains. It's only his commitment to the long-term deals that his company remained a net seller of stocks again last year as it offloaded $7.4 billion worth shares than it bought.

Despite the paucity of new investments Berkshire has continued to make profit as the economy recovered from the depths of the pandemic. The company reported making $39.6 billion during the fourth quarter. That's up from $35.8 billion a year ago.

He also underscored the fact that his company holds $158 billion of domestic infrastructure assets, and paid $3.3 billion in federal income tax — 0.8 percent of the $402 billion of corporate income tax collected by the government in 2021.

The company's massive portfolio is a thanks to four giants that account for a large chunk of Berkshire's value. He also highlighted the $161 billion value of his company’s 5.6 percent in Apple is so far the largest holding in Berkshire's stock portfolio.

Pie in the apple

He admitted tech major Apple as one of the four pillars that hold Berkshire Hathaway's portfolio. This is a stark departure from the current portfolio that largely comprises conventional companies that he built in past five decades.

“Apple – our runner-up Giant as measured by its yearend market value – is a different sort of holding. Here, our ownership is a mere 5.55%, up from 5.39% a year earlier,” Buffett said in the letter. “That increase sounds like small potatoes. But consider that each 0.1% of Apple’s 2021 earnings amounted to $100 million. We spent no Berkshire funds to gain our accretion. Apple’s repurchases did the job.”

Meanwhile, he didn’t offer any new details about Berkshire’s succession planning although it is now believed that Vice Chairman Greg Abel would someday replace him as CEO. It’s a different matter that the 91-year-old has yet no plans to retire. Buffett only confirmed that plan after Charlie Munger hinted at it during last year’s annual meeting.