As Finance Minister Sitharaman presents the Budget for the upcoming financial year. Let's look at some stocks and sectors directly impacted by some of the announcements. 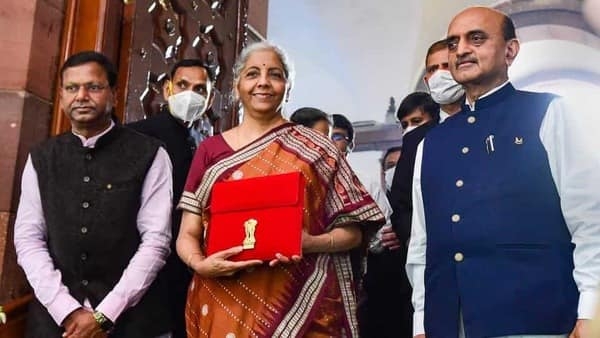 Union finance minister Nirmala Sitharaman at Parliament for the presentation of the Union Budget. (PTI)

As Finance Minister Sitharaman presents the Budget for the upcoming financial year. Let's look at some stocks and sectors directly impacted by some of the announcements.

The stock rose over 3.5 percent before paring some gains after Finance Minister Nirmala Sitharaman announced 400 new-generation Vande Bharat trains in order to boost transportation and logistics. These trains will be manufactured in the next 3 years, she added.

Infra stocks jumped after the FM announced a sharp increase in public investment & capital expenditure in the Budget. 'Gati Shakti' master plan for expressways to be formulated this FY which will expand highways by 25,000 kms in FY23, Sitharaman announced. stocks like PNC Infra, IRB, Jaypee Infra rose over 3 percent.

Nifty Realty was trading over a percent higher as the FM announced an allotment of ₹48,000 crore to housing projects. 80 lakh houses to be built under the PM Awaz Yogna, she added. Oberoi Realty, Brigade, Sobha, DLF, Sunteck rose between 1-3 percent.

Fertilizer stocks were trading in the green as FM announced chemical-free natural farming will be promoted throughout the country. FY22 farm procurement value to be ₹2.37 lakh crore, she noted. Chambal Fertilizer, Madras Fertilizer, RCF rose over a percent each.

Logistic stocks rose after the FM announced 100 Gatishakti Cargo terminals will be developed in the next 3 years. Allcargo Logistics, Gati, Snowman Logistics rose between 2-5 percent post the announcement.'

Insurance stocks were also lifted as FM stated that IRDA has given permission to issue surety bonds by insurance companies. GIC, HDFC Life Insurance, ICIC Lombard were up around a percent each.