Investors lapped up shares of the recently beaten down sectors such as IT, pharma, realty and FMCG owing to some comfort on the valuation front. 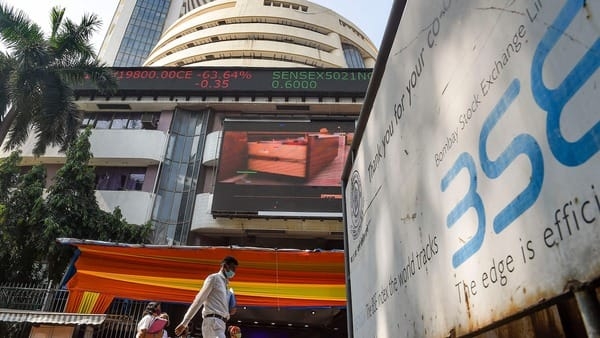 Bargain hunting in the latter half of the session helped the market benchmarks the Sensex and the Nifty end in the green after four consecutive sessions of losses on March 8.

Investors lapped up shares of the recently beaten-down sectors such as IT, pharma, realty and FMCG owing to some comfort on the valuation front. Rupee's weakness against the dollar also helped export-oriented sectors such as IT and pharma.

Global cues, however, remained weak as some of the top global markets traded near a year low levels and gold climbed above the key $2,000 level as investors feared a ban on Russian oil imports will further push oil prices which will lead to high inflation and hit economic growth.

Crude oil prices remained elevated and traded near $125 a barrel. Brent crude had briefly hit more than $139 a barrel in the previous session. Rupee's health remained weak as the Indian currency closed at 76.91 (provisional) against the US dollar.

Midcaps and smallcaps outperformed their larger peers as the BSE Midcap and smallcap indices closed 1.46 percent and 1.33 percent higher, respectively.

Among the sectoral indices, BSE Realty rose 3.19 percent, followed by IT and teck indices, both rising more than 2 percent. On the flip side, BSE Metal fell 1.94 percent.

"Domestic indices reversed its trend and traded with gains led by export-oriented sectors like pharma and IT which witnessed buying interest as the rupee fell to its record lows. Favorable exit poll results of state election and low-level buying seen in mid and small caps also helped in adding optimism in the domestic market," said Vinod Nair, Head of Research at Geojit Financial Services.

Will the gains sustain?

The market ended in the green owing to short-covering and selective buying was seen in some sectors such as realty, media, PSU bank sectors. Some profit booking was seen in metal stocks.

The market may see such occasional rebounds but sustainability is questionable as long as global cues remain fragile.

"Markets may witness further rebound however sustainability would be difficult. We reiterate our cautious stance and suggest focusing more on the sector and stock selection. Global cues such as geopolitical tension and movement in crude would remain in focus. On the index front, Nifty would face resistance around 16,200-16,400 zone," said Ajit Mishra, VP - Research, Religare Broking.

Shrikant Chouhan, Head of Equity Research (Retail) at Kotak Securities, pointed out that Nifty has not only cleared the resistance of 15,900 but succeeded to close above the same which is broadly positive. In addition, after a sharp decline, Nifty has formed a promising long bullish candle that also supports a short term uptrend.

"On the daily chart, a bullish engulfing pattern has formed which suggests short term positive reversal. On the higher end, the index may move towards 16,200-16,400 over the short term. On the lower end, 15,800 is likely to act as support," said Rupak De, Senior Technical Analyst at LKP Securities.