Market Wrap: Market snaps 5-day losing streak on the back of bargain hunting

Market Wrap: Market snaps 5-day losing streak on the back of bargain hunting 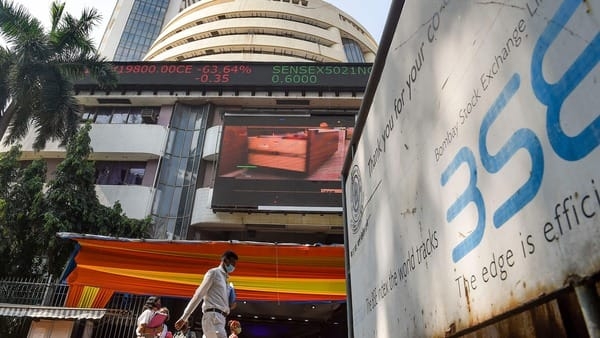 Sensex opened in the green and stayed higher throughout the session eventually closing 574 points, or 1.02 percent, higher at 57,037.50. (PTI Photo/Kunal Patil)

The recent correction has made these heavyweights attractive in terms of valuation and while concerns over inflation and lukewarm earnings persisted, bargain-hunting helped the market stay in the green.

Crude oil prices slightly moderated while the rupee rose against the US dollar which also influenced the mood of the market. Brent Crude traded below the $110 a barrel mark while the rupee ended 30 paise higher at 76.21 per dollar.

In the 30-share pack Sensex, 20 stocks ended in the green. Stocks such as UltraTech Cement, Asian Paints, Maruti, Reliance Industries and TCS ended as the top Sensex gainers in that order. On the flip side, Bajaj Finance, ICICI Bank, Bajaj Finserv, Tata Steel and ITC ended as the top laggards.

BSE Midcap and smallcap indices closed 0.45 percent and 0.36 percent higher, respectively. Among the sectors, auto and energy indices rose more than 2 percent each while oil & gas, telecom, IT, teck, pharma and consumer discretionary goods & services indices rose over a percent each.

"With support from recovery in beaten-down HDFC stocks and the IT sector, the market countered yesterday’s selloff. Foreign investors are pumping out funds in large quantities while support from DIIs is helping the market to partially balance the pressure. A similar level of volatility can be expected to continue until global uncertainties settle down leading to a softening of FII selling," said Vinod Nair, Head of Research at Geojit Financial Services.

Even though the market has clocked gains today, it is early to say that the gains will sustain because concerns over inflation, rising bond yields, looming rate hikes, geopolitical tensions and mixed earnings are the near-term headwinds that will continue to weigh on market sentiment.

"Markets are largely following their global counterparts, which are currently offering mixed cues. Besides, indications from the domestic front are also not very encouraging. On the index front, 16,800 would continue to act as crucial support in Nifty while the 17,250-17,350 zone would be tough to cross. Keeping in mind the scenario, participants shouldn’t read much into the single-day rebound and stay light.

While fundamentally not much has changed for the markets, technical indicators are showing the levels around 16,800-17,000 to be key supports for Nifty.

"The level of 16,800 would continue to act as crucial support for Nifty while the 17,250-17,350 zone would be tough to cross. Keeping in mind the scenario, participants shouldn’t read much into the single-day rebound and stay light," said Ajit Mishra, VP - Research, Religare Broking.

"The market witnessed a swift recovery and attempted to sustain above the key support levels near 17,100. 17050-17100 level may act as a support zone from the short-term perspective. Technical indicators suggest, a volatile movement in the market. As such we retain our cautious stance and advise the traders to refrain from building a fresh buying position until we see further decisive movement in the market," said Vijay Dhanotiya, Lead of Technical Research, Capitalvia Global Research.