US Dollar hit a two-decade high amid Fed tightening; What's next?

US Dollar hit a two-decade high amid Fed tightening; What's next?

Since the beginning of the year, the US Dollar Index has risen by 8%; in the last 12 months, it has risen by 14%. This year alone, the dollar has gained more than 13% against the Japanese yen. 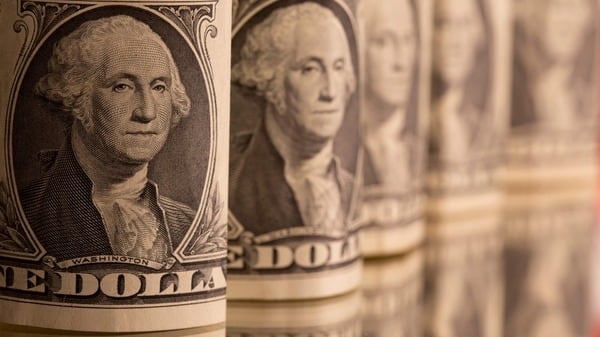 The US Dollar Index rose above the 104 mark on Monday, hitting a fresh 20-year high, as expectations of further Federal Reserve monetary tightening to combat inflation and fears of slowing global economic growth drove investors into the safety of the dollar, Reuters reported.

The dollar has risen for five straight weeks as U.S. Treasury yields have climbed on expectations the Fed will be aggressive in attempting to tamp down inflation.

Since the beginning of the year, the US Dollar Index has risen by 8%; in the last 12 months, it has risen by 14%. This year alone, the dollar has gained more than 13% against the Japanese yen.

The US Dollar Index hit 104 mark on Monday.

The Fed raised its benchmark funds rate by 50 basis points, and it is the biggest increase the rate-setting US Fed has instituted since May 2000. Back then, the Fed was fighting the excesses of the early dot-com era and the internet bubble.

The Fed also announced that it would start culling assets from its $9 trillion balance sheet in June.

Meanwhile, uncertainties surrounding the outlook for inflation, the war in Ukraine and Chinese lockdowns were among the factors that spurred safe-haven demand for the dollar.

Moreover, last week, the US Labor Department showed that employers added 428,000 jobs in April, the 12th straight month of 400,000 or more gains. The unemployment rate remained unchanged at 3.6 per cent, just a tenth above its pre-pandemic level, the lowest rate in 50 years, and this will encourage Federal Reserve officials to raise interest rates more aggressively.

Investors now look ahead to fresh inflation data due on Wednesday to gain insight on the central bank’s possible next steps.

Futures markets are pricing in a 75% of a 75 basis point rate increase at the Fed’s next meeting in June and more than 200 basis points of tightening by year-end.

The US Dollar Index measures the value of the US dollar in relation to six foreign currencies as measured by their exchange rates. The dollar's value against the euro accounts for more than half of the index's value. The Japanese yen, British pound, Canadian dollar, Swedish krona, and Swiss franc are the other five currencies.

The other currencies, the Sterling and the New Zealand dollar hit 22-month lows. The Japanese yen recovered a little from a fresh 20-year low of 131.34 yen per dollar hit overnight. The Japanese currency, which is sensitive to moves in U.S. yields, strengthened a little more on Tuesday to 130.1.