Q4 Earnings Preview: Consumer sector to witness muted growth on the back of inflation

Q4 Earnings Preview: Consumer sector to witness muted growth on the back of inflation

The brokerage estimates the consumer firms to report revenue growth of 8 percent, EBITDA of 7 percent, and profit of 5 percent in the March quarter. 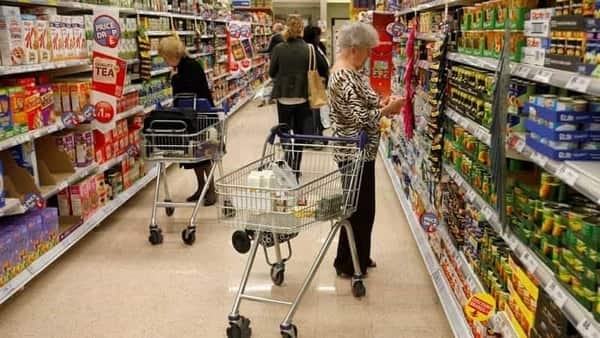 The brokerage estimates the consumer firms to report revenue growth of 8 percent, EBITDA of 7 percent, and profit of 5 percent in the March quarter.

The earnings season for the final (March) quarter of the financial year 2022 (Q4FY22) has started and these earnings will determine the trajectory of the stock markets in the near term.

Domestic brokerage Motilal Oswal (MOSL) has a positive outlook on corporate earnings for the quarter under review. It expects Nifty50 companies to post another quarter of high double-digit growth. It expects a March quarter earnings growth of 23 percent year-on-year (YoY).

According to the brokerage, the 19 consumer companies under MOSL's coverage universe are likely to report muted growth for the March quarter. The brokerage estimates the consumer firms to report revenue growth of 8 percent, EBITDA of 7 percent, and profit of 5 percent in the March quarter. Further, it forecasts a sales growth of 26.7 percent for the quarter under review.

Two-year average sales growth is expected to be 17.2 percent and EBITDA growth at 16.3 percent, it added.

"Sales growth will largely be led by price hikes as Staples volumes hover in the negative to the slightly positive range, impacted by spiraling inflation and a slowdown in rural demand," noted MOSL.

Inflation has been the theme in the March quarter, with already elevated commodity costs pushed further upwards owing to the Russia-Ukraine war, which broke out in February 2022.

With most companies having taken steep price hikes in the December quarter, managements were already apprehensive of raising prices further as it risked affecting demand, the brokerage stated. However, spiraling input costs compelled most managements to raise prices further in an effort to protect margins, it added.

The Nifty FMCG index has also given muted returns, rising just 1 percent in 2022 YTD on the back of surging inflation amid the Russia-Ukraine war. In the last 1 year as well, the index has underperformed the benchmark, advancing around 9 percent as against a 21 percent rise in Nifty.

Among constituents, Radico Khaitan has risen the most in the last 1 year, up 78 percent followed by United Spirits, which rose 73 percent. Meanwhile, Varun Beverages, United Breweries, ITC, Marico, and Tata Consumer added 20-50 percent each. However, Dabur, Emami, Britannia, and HUL were in the red for this period.

Meanwhile, on a YTD basis, most stocks in the index gave negative returns. Radico Khaitan, Godrej Consumer fell in double digits while HUL, Emami, Nestle, Britannia and P&G lost over 5 percent each.

The brokerage noted that the recent correction in stock prices has resulted in pockets of opportunities, especially in companies with lower exposure to commodity cost pressures and strong structural growth visibility.

Going ahead, MOSL believes a few key developments to monitor include: a) a fresh COVID wave engulfing the country, b) further escalation in the ongoing conflict in Ukraine continuing to affect commodity costs, and c) an extended slowdown in rural demand. On the positive side, a good Rabi harvest may help boost rural demand, it added.

Muted performance is expected from HUL owing to the impact on margin due to higher palm oil prices and the underperformance of its Discretionary portfolio, stated the brokerage. It expects a 4 percent YoY volume decline, with sales growth of 6.1 percent and an adjusted PAT decline of 2.8 percent.

ITC is expected to post a 4 percent growth in Cigarette volumes with a 4.1 percent YoY increase in sales, it said. While its FMCG-Others business is likely to face severe input cost pressures, ITC is relatively insulated, given the pricing power in its Cigarettes business, stated MOSL. Staples are likely to report a 7.4 percent sales growth over Q4FY22, led by price increases, it added.

Why should you buy FMCG stocks?